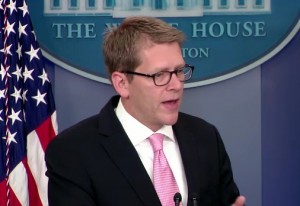 In the hours since the Jimmy Hoffa Voter Encouragement Crisis/Incendiary Rhetorapocalypse, conservative media figures have looked to the White House to provide some becalming wisdom to a shaken nation. At Tuesday’s White House briefing, ABC’s Jake Tapper asked Press Secretary Jay Carney how Hoffa’s comments fit with the President’s post-Tucson remarks in January.

In case you missed it, Teamsters president James Hoffa (not Jr.) told the crowd at a presidential Labor Day event ““Everybody here’s got a vote,” Hoffa said Monday. “If we go back and we keep the eye on the prize. let’s take these sonofabitches out and give America back to America where we belong.”

The quote has been shortened in many reports to “Let’s take these sons of bitches out,” and held up as an example of the “violent rhetoric” that President Obama forswore in the wake of the Tucson shooting tragedy.

Hoffa’s remarks are the toast of a bone-dry post-Labor Day news cycle, so Carney had to expect questions about it. The briefing was pushed back an hour-and-a-half, time likely spent fine-tuning for an already important messaging day.

The first reporter to ask about Hoffa’s remarks was ABC’s Jake Tapper, who pressed Carney on the President’s January call for civility, and in a heated exchange, tried to get Carney to set a standard for surrogate quote-ownership for the 2012 campaign.

Tapper began by reading President Obama’s January quote, then asked, “Did he mean that?”

Here’s a transcript of the rest of the exchange: (via Mediaite transcription)

Jay Carney: Of course he did.

Jake Tapper: Then, where do the comments by the Teamsters president fit in with that?

Jay Carney: First of all, those weren’t comments by the President. Secondly, as I think it’s been reported…

Jake Tapper: …comments by a union leader, at an event that President Obama spoke at…

Jay Carney: I understand that there is a ritual in Washington that, you know, somebody says something, and you link the associations, and then everybody who has an association with him or her has to avow or disavow. The President wasn’t there, he wasn’t on the stage, he didn’t speak for another twenty minutes, he didn’t hear it. I really don’t have any comment beyond that.

Jake Tapper: Okay, well, some of us covered the campaign, and recall a time when somebody made some harsh comments about then-Senator Obama during the introduction at a McCain rally, and the Obama campaign was offended, and expected an apology, Senator McCain came out and did so.

Jake Tapper: So the precedent you’re setting right now for the 2012 election is, the Republican candidates are the ones to pay attention to. Those who introduce them at rallies, their surrogates, we don’t have to pay attention to anything that they say.

Jay Carney: Jake, I think I’ve said what I can say…

Jake Tapper: Is that the standard now?

Jay Carney: The standard is we should focus on the actions we can take to grow the economy and create jobs, instead of focusing on kabuki theater.

Fred Lucas: Does the President find the comments appropriate?

Jay Carney: Can we move on?

Carney’s response is generally in line with that of DNC Chair Debbie Wasserman-Schultz earlier today: without endorsing Hoffa’s remarks, each steered well clear of anything that could be considered an apology, or even a denunciation. Carney’s response is sure to draw ire from conservatives, but liberals will likely cheer the unspoken subtext: no more Mr. Nice Guy.

Here’s video of the exchange, from The White House: