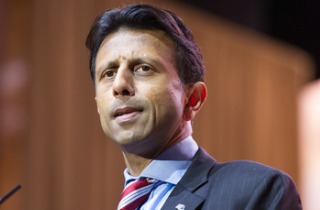 Rand Paul is making foreign policy a big part of his 2016 campaign, contrasting himself with the more hawkish Republicans leading in Congress and/or running for president. On MSNBC this morning, Paul actually said, “ISIS exists and grew stronger because of the hawks in our party who gave arms indiscriminately, and most of those arms were snatched up by ISIS.”

Paul’s already gotten some pushback from other Republicans for his positions on foreign policy and national security, but today Louisiana Governor Bobby Jindal released a statement really tearing into Paul.

Jindal has not announced a 2016 run yet, but is likely to do so in the coming weeks. Here’s Jindal’s entire statement unloading on Paul (emphasis added):

This is a perfect example of why Senator Paul is unsuited to be Commander-in-Chief. We have men and women in the military who are in the field trying to fight ISIS right now, and Senator Paul is taking the weakest, most liberal Democrat position.

It’s one thing for Senator Paul to take an outlandish position as a Senator at Washington cocktail parties, but being Commander-in-Chief is an entirely different job. We should all be clear that evil and Radical Islam are at fault for the rise of ISIS, and people like President Obama and Hillary Clinton exacerbate it.

American weakness, not American strength, emboldens our enemies. Senator Paul’s illogical argument clouds a situation that should provide pure moral clarity. Islam has a problem. ISIS is its current manifestation. And the next President’s job is to have the discipline and strength to wipe ISIS off the face of the earth. It has become impossible to imagine a President Paul defeating radical Islam and it’s time for the rest of us to say it.

Well, at least we know the GOP debates this time around won’t be dull.