Limbaugh: Bill Clinton, Obama, NYT, Are “Responsible For Any Terror Attack” In America 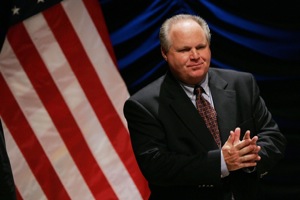 While it took most of the media until Wolf Blitzer‘s interview with former president Bill Clinton to catch his warning that the Tea Party movement could lead to a new Oklahoma City bombing, Rush Limbaugh caught Clinton’s first reference to the bombing during his Center for American Progress speech– and he insists Clinton, among others, is “out to destroy Western civilization.”

Limbaugh interpreted the statements as a preemptive attempt to brand any possible terrorists out there in America as tea partiers to discredit the movement, so he retaliated by tossing the hot potato back and preemptively blaming Clinton and Barack Obama— under whom he accused the former president of acting, and threw New York Times in there for good measure:

“If there is a future incident such as Oklahoma City, the blame is squarely on the shoulders of Bill Clinton and Barack Obama, who I’m sure is coordinating Clinton’s appearance on this. Bill Clinton just gave the kooks out there an excuse to be violent…the New York Times has reported national security secrets, they are responsible for any terror attack on this country, they have published all kinds of battle plans… and yet they sit here, Clinton and Obama, and try to blame me, and us on the radio, for something that has not happened while setting the stage for it to happen…”

He also called Clinton’s statements hypocritical, since during his final days as president he pardoned the leftist terrorist group the Weather Underground, as well as “a bunch of Puerto Rican terrorists.”