Limbaugh: Clintons ‘Look Like A Joke,’ Are Furious Over Being Compared To Anthony Weiner, Huma Abedin
audio

Limbaugh: Clintons ‘Look Like A Joke,’ Are Furious Over Being Compared To Anthony Weiner, Huma Abedin 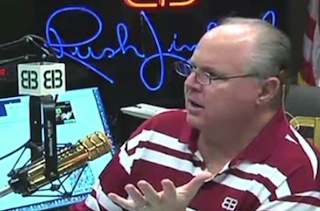 “She’s looking like a joke,” declared conservative radio host Rush Limbaugh on Tuesday. He made this observation while digging into the flood of recent stories featuring quotes from anonymous sources loyal to Bill Clinton and Hillary Clinton seeking to distance the presidential couple from Anthony Weiner and Huma Abedin. “What the Clintons don’t get is that, outside the Democrat Party, they are a joke,” Limbaugh insisted.

“I think that all that’s on Hillary’s mind right now is right in the news,” Limbaugh said rustling a variety of print outs on his desk. “I believe every word of these stories that the Clintons are ticked at the Weiners.”

“This does not make Hillary look presidential,” he added. “The Weiners are a joke.”

Limbaugh said that his instincts tell him that there is no “groundswell” of support for a potential Hillary Clinton presidential bid in 2016. He said that Clinton’s highly publicized lunches with President Barack Obama and Vice President Joe Biden were, in his estimation, tactics to get her name out of the news being negatively associated with Weiner and Abedin.

“I actually had not attached any meaning at all to this lunch other than Hillary wants a distraction from the Weiner story, because that’s what is not making her look presidential,” Limbaugh said. “She’s looking like a joke, and so is Bill.”