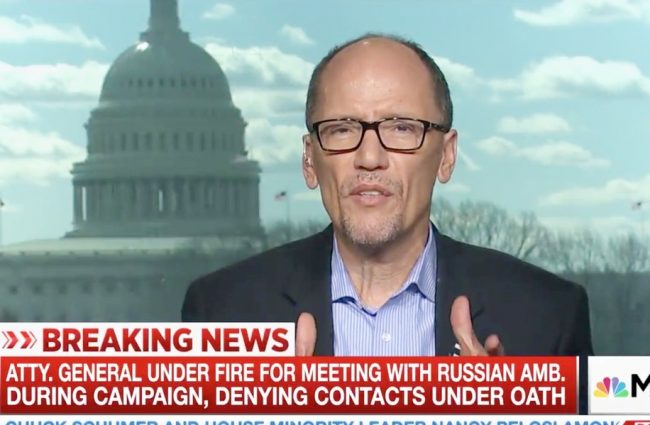 Only five weeks into the presidency of Donald Trump and words like “perjury” and “ties to Russia” are being thrown around a lot. Just today, Attorney General Jeff Sessions recused himself from any Department of Justice investigations into presidential campaigns. That came after it was revealed that during his time as a surrogate for Trump’s campaign, he was in contact with the Russian ambassador, which he did not mention when questioned under oath at his own confirmation hearing.

It also came after a whole bunch of elected officials called on him to recuse himself and, in some cases, resign altogether.

Here is a look at who was making those calls, from politicians to protesters:

New DNC Chair Tom Perez tells @MSNBC Sessions should resign: “The rule of law is the rule of law.” pic.twitter.com/PGpTy4KM76

Attorney General Jeff Sessions, if you lied under oath to the American people and Congress, you need to resign. https://t.co/3A41x3nTbf pic.twitter.com/AcZeleFttZ

At this point, the only way to get a fair investigation of Trump/Russia ties is with a new AG. Sessions should resign.

RT if you agree: AG #Sessions, the top law enforcement officer of our country, lied under oath. He must resign. pic.twitter.com/5UCe1WCGYq

BREAKING: The ACLU is calling for an investigation into potential perjury by Attorney General Sessions https://t.co/zg7ezjGovj

Sen. Dianne Feinstein statement on Jeff Sessions: “If the attorney general refuses to recuse himself, he should resign.” pic.twitter.com/oWEUhP9xfb

I don’t want to Russia to conclusions, but #Sessions should resign. Looks like Trump’s #RussiaTies are Putin him in a bad spot #SessionsOver

We are far past recusal. Jeff #Sessions lied under oath. Anything less than resignation or removal from office is unacceptable.

Those of us who opposed Sessions from the beginning saw him for who he was — a throwback and a liar. Sessions needs to resign, immediately.

And we need Attorney General Jeff Sessions – who should have never been confirmed in the first place – to resign. We need it now.

Sessions lied under oath before Congress. Recusal isn’t enough. He must resign.

SUSAN COLLINS, who testified on Sessions’ behalf at confirmation hearing, calls on him to recuse himself from the DOJ investigation

See any others? Send them our way!