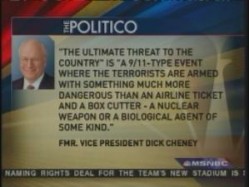 Politico, which believe it or not has only been in existence for three years now, has made its fair share of critics in D.C. many of whom feel the site is the progenitor of the type of journalism now plaguing the administration, which tends to take the minutae and blow it up into a trend piece. What Politico hasn’t been accused of thus far is being a mouthpiece for the angry, retributive, gun-slinging former Vice Presidents. Until last night, that is.

During a segment on Hardball yesterday Chris Matthews suddenly took what was a routine conversation with Politico’s Jonathan Martin about Cheney’s recent criticisms of President Obama and turned it into a rather pointed criticism of Politico’s seemingly cozy relationship with Cheney. Matthews wanted to know whether Dick Cheney has “a thing for Politico” and why it often feels like Cheney uses Politico “the way he’d use Drudge, or somebody.” (Snap!). Here is the exchange (h/t Think Progress):

Matthews: I mean, he’s got his own news conduit.

Martin: You know, we aggressively report on both sides.

Matthews: It’s not reporting. He feeds you this stuff. … I do like Politico. He’s feeding you guys this crap.

[Not content to leave it there, despite the fact Martin is looking less than pleased about this line of questioning, Matthews returns to it]

Matthews: What’s he call up and say? “I got a hot one for you, Jon. Can you take — what’s your email address?” Is that what he does?

What Matthews is referring to is Dick Cheney’s well-covered criticisms of President Obama many of which were first pubbed as exclusives by Politico. The most recent of which was last week’s accusation that Obama is “trying to pretend we are not at war.” That quote was part of a Mike Allen exclusive, which went unchallenged and unfact-checked by Allen who printed the quote in full with zero commentary. Rachel Maddow later took care of the fact-checking bit. Is Politico about to get a taste of their own meme medicine? If Mike Allen suddenly interrogates Cheney the next time he hands them an exclusive we shall have our answer. In the meantime, it all makes for great traffic, and traffic pays, yo.