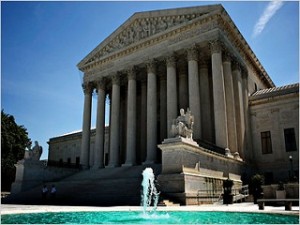 When the U.S. Supreme Court announces its decision on three of Barack Obama’s healthcare reforms later this month, the media hopes that the decision will be broadcast live to an audience of U.S. citizens tuning into the event.

The Reporters Committee for Freedom of the Press and a coalition of media organizations sent the Supreme Court a letter today requesting that it open proceedings to live audio and video coverage. Citing a “strong interest nationwide” on the part of media and citizens alike, the Reporters Committee’s letter argued that “such access would allow the public to be informed of the Court’s ruling in a timely matter.”

Along with their formal request, the Reporters Committee also addressed concerns that allowing live coverage of the Supreme Court’s proceedings would disrupt the flow of discussion.

“[We are] aware that various members of the Court have expressed concern that live television coverage of its proceedings may negatively affect the character and flow of the back-and-forth discussion between attorneys and justices,” the letter read. “But this interest is clearly not implicated when the proceeding at issue involves the summary of opinion rather than the interaction at oral argument.”

The letter was signed by most of country’s largest media organizations, including The New York Times, The Washington Post, CBS, and Hearst Corporation. Smaller but significant outlets like The Associated Press and Bloomberg News also put down their signature. These sorts of requests have been made, and denied, before in high profile cases.