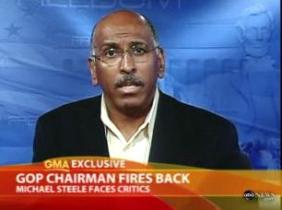 Actually, he was also for the race card while he was against it.

RNC Chairman Michael Steele, in a Good Morning America interview this morning, said that both he and President Obama are given “slimmer margins of error” because they are black, a sharp departure from what he has said in the past (at least, where President Obama is concerned). Steele hasn’t shied away from using his race to deflect the scrutiny of outsiders in the past, while ruling out race as a factor in criticism of the President. That all changed today, and it could mark the end of Steele’s teflon reign.

When Steele was asked to respond to Jimmy Carter‘s assertion that “much of the intensely demonstrated animosity” toward President Obama was due to race, Steele dismissed the notion out of hand, but when it came to media scrutiny of the job that Steele was doing, it was a different story:

But there’s an edge to his voice when he talks about a double standard that he believes has been applied by his critics, and he posits racism as the cause: “I don’t see stories about the internal operations of the DNC that I see about this operation. Why? Is it because Michael Steele is the chairman, or is it because a black man is chairman?”

To their credit, conservative blog Hot Air was all over this:

For all the grief we give O-bots for playing racial politics in defense of their guy, has Obama himself played it as much as Steele has? Remember, Steele claimed that some white Republicans fear him and sat passively while D.L. Hughley said the convention looked like a Nazi rally. In fact, he once played the race card on Obama himself in questioning why the White House was pressuring David Paterson to retire. Has The One hit this theme as much as he has?

Of course, Steele is entirely correct that prominent black people often face the double-standard he describes. Today’s statement was fairly mild, and entirely reasonable. It also validates what many have said about the President’s most intense critics.

But this doesn’t just cut against Steele in that it can be spun as a defense of the President. No, Steele’s true crime is that he has done what Andrew Breitbart describes as the “worst thing you can do in America,” accusing someone of racism, to his critics within the Republican party. Although replacing Steele so close to an election would be inconvenient, the hue and cry over this unforgivable sin may force the RNC’s hand.