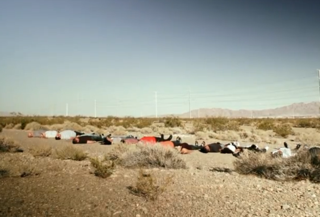 It’s not quite “Demon Sheep,” but it is certainly the eeriest ad of the 2012 election cycle so far. In anticipation of tonight’s CNN debate, Mitt Romney has released an online spot attacking President Obama for his handling of the economy. It’s a trim ad– there are no concrete facts or technocratic details– just the pathos of watching Americans line up to tell their economic tales of woe after being metaphorically run over by the Obama Economic Recovery Wagon.

The video consists of two spoken sentences, music that would not be out of place in an installment of The Legend of Zelda, and a series of otherworldly images of people from all walks of life. Text in the desert sky begins the ad, explaining that President Obama described the current impasse America faces in terms of economic well being as “bumps on the road to recovery.” That phrase leads to the image of a line of people lying down in the desert, as if to form a track– the classic “damsel in distress” positioning villains in Westerns use to attempt to murder the heroine. No, Romney does not fly down and cut off the cords tying the people down, because there aren’t any– the people rise up themselves. Chanting the mantra “I am an American, not a bump in the road,” each person stands up with a card in their hand chronicling their economic woes since President Obama took power. Some signs do not even have stories on them, but simply say “Where are the jobs?” The ad ends with the words “Believe in America” emblazoned in the sky.

It is quite a bizarre ad for several reasons, paramount among them that it is a pure attack ad with not even the faintest attempt to compare or contrast the candidates. It could have been made by any other candidate, and Romney’s name isn’t even mentioned until the end, as required by federal election laws. But the choice to interpret the “bump in the road” comment as referring to the people suffering from the recession and not specific situations that hurt the market is a bizarre one, until one evaluates the rhetorical landscaping both Democrats and Republicans have been working on since President Obama passed the halfway point in his tenure.

In many ways, using the phrase “bump in the road” to invoke the image of President Obama physically running a car over everyone struggling to find work in America is the natural progression of our national discourse. For one, it isn’t the first time that one political faction is accused of wanting to kill all Americans instead of solve actual problems, literally or otherwise. That trend, one could argue, rose to prominence in the Obama administration thanks to former Congressman Alan Grayson, who, with the help of some trusty poster boards, proclaimed to the House floor that the Republican health care plan was for the infirm to “die quickly.” Grayson, at the time, was verbalizing an attack Republicans– namely Sarah Palin— had deployed that summer in noun form: the “death panel.”

While the death talk never rose to presidential level, President Obama did add the automobile element to the debate, often using his analogy of America as a car that Republicans had driven into a ditch and “now they want the keys back.” When Republican won control of the House of Representatives, he modified the analogy by telling them to “sit in the back” lest they hurt someone, a metaphor that, naturally, someone or another found a race angle to. Romney’s is a hybrid of the two lines of attack, subconsciously or otherwise: President Obama has been driving the car since 2008, and running over millions of unemployed Americans in the process. Republicans may have crashed into a ditch, but they never ran anyone over.

Whether the complex propaganda piece will work rests far more heavily on Romney’s performance in tonight’s debate than the number of online views it receives– equating the work the Obama administration has done to fix the economy with reckless driving is the sort of rhetoric that has no impact if the candidate has no alternative plan to prevent the accidents. However, the goal of such an ad, while superficially to bring down the President’s economic pedigree a notch, is far more profoundly linked to those sharing the podium with Romney tonight (and Gov. Gary Johnson, who CNN excluded from the debate for nebulous reasons). Romney is competing with masters of nuanced extreme rhetoric like Rep. Michele Bachmann and not-so-masterful, not-so-nuanced extreme rhetoricians like Rick Santorum. Romney has yet to prove he is anything more than Tim Pawlenty with a serious health care reform blight on his resume to primary voters, and one-upping his competition by calling President Obama a mass (economic!) murderer without really doing so gives them all fair warning he is not afraid to shed his moderate image this time around.

Below is Romney’s campaign video. Romney will be debating on CNN tonight at 8PM in New Hampshire: