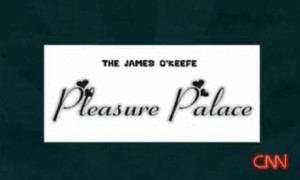 Since the story of conservative ACORN slayer James O’Keefe‘s attempt to sexually humiliate CNN correspondent Abbie Boudreau broke on Wednesday, ever-more disturbing details have emerged. Saturday night’s airing of Right on the Edge, the Boudreau documentary about which she and O’keefe were supposed to meet, fills in a few more blanks, and reveals just how monumental a screwup this was for O’Keefe. If not for O’Keefe’s plot, the show would have been an unqualified win for the conservative activist movement.

The segment on James O’Keefe reveals little more of the plot, but does present a fairly ironclad rebuttal of O’Keefe’s denial. Several emails from O’Keefe to courageous whistleblower Izzy Santa corroborate many elements of the ‘CNN Caper’ document that O’Keefe says he rejected. The emails also include the amusing touch that O’Keefe needed a ride back to DC from the meeting that he had arranged in Maryland. The segment also builds a surprising amount of suspense around whether Abbie can continue to film herself and drive at the same time.

Missing from the segment, though, is the detail that Boudreau gave in an interview with Rick Sanchez. She revealed that the “CNN Caper” document (which has been partially posted online) shows that the “script” called for the prank to end with Boudreau in tears, begging to be let off of the boat. In several interviews, Boudreau has explained that CNN has withheld a lot of material related to this story, ostensibly because it’s “too graphic.” This is a curious explanation, given what they’ve already posted, and the existence of hyphens and asterisks. Surely, they could have been sufficiently redacted to meet the news department’s standards.

Here’s the portion of Right on the Edge that covers O’Keefe:

O’Keefe’s actions take on an added dimension of stupidity once you watch the rest of Right on the Edge, which turns out to be an almost completely uncritical look at a handful of conservative video activists. Abbie Boudreau doesn’t ask anything approaching a tough question. In her defense, Boudreau has talked about how skittish many of the subjects were about participating in the project, and it shows. James O’Keefe’s ACORN cohort, Hannah Giles, even makes it a prerequisite of her participation that conservative media mogul Andrew Breitbart (who has denounced O’Keefe’s actions) be present to chaperone the interview. If word got around this close-knit community of people who don’t react well to tough questions, Boudreau might have found herself without anyone to participate.

Even so, she also lets a lot of things slide. Most notably, the documentary never even tries to delve into the legitimacy of this form of “journalism,” an unusual omission from an outfit that has branded itself the last bastion of objective journalism. The film also ignores the homophobia and misogyny of Jason Mattera, while also presenting one-sided clips from his ambush interviews, which don’t always go all that well for him.

That is not to say that the doc isn’t at all revealing. Sometimes, if you can’t push an interview subject, it is better to pull whatever you can out of them, and the activists in Right on the Edge reveal a palpable suspicion of established journalism that viewers can make up their own minds about.