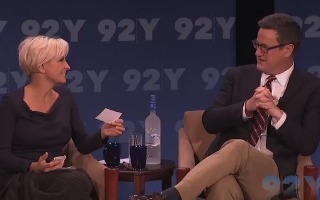 Morning Joe hosts Mika Brzezinski and Joe Scarborough — along with frequent show panelists Mike Barnicle, Steve Rattner, Jon Meacham and Mark Halperin — weighed in on the issue of bias in media as part of 92Y’s Campaign for the American Conversation.

Barnicle weighed in, opining that “the greatest story ever told is the story of America,” adding that the story of America this year, and every election year, is “about you, it’s about the people who vote.” And yet, media consumers are inundated by the media with stories about polls and numbers and things that don’t necessarily resonate with voters and the lives they lead.

Scarborough described how many consumers are also part of the issue, seeking out media — TV in the morning, radio during their commute, blogs when they return home — that only reinforces their own viewpoints and prejudices. And what happens? “At the end of the day, your opponent’s not wrong… Your opponent is the enemy.” (And of course J-Scarizzle mentioned the “Cheeto eaters” — bloggers who weigh in on news and will often focus on the more sensational, tabloid aspects of what’s going on. Not that you’d ever seek out such things, gentle readers.)

Meacham gave a practical reason for why this exists: As “the economic storms” have hit the mainstream media over the last 10 to 12 years, “you now have news organizations, media organizations, that have an economic stake in the perpetuation of conflict rather than the resolution of problems.”