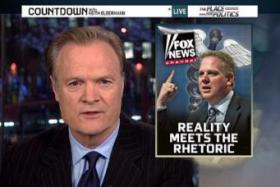 Just kidding – it was more hypocrisy from two gloating left-wingers over HCR, with occasional observations on the leanings of FNC.

O’Donnell opened the segment by setting the tone for what was to come, discussing all the recent public support in the past couple days:

Whether that’s because the public tends to side with winners, because the right wing noise machine sputtered, or because every major mainstream news organization’s treatment of the bill’s passage included all the good things in the bill…

So now that it’s passed, and everyone (except Fox) is saying good things about it, people support it? It’s an interesting idea, considering O’Donnell himself was highlighting all the things the bill didn’t do on a regular basis, as recently as last week.

And then he turned to Fox News – O’Donnell called the coverage “almost comical,” noting Megyn Kelly spent “about 23 seconds on it.” This would make sense, and is a very valid point – the news coverage certainly looked different than the coverage on CNN or MSNBC. Highlighting Kelly, a neo-anchor whose supposed all-news show can be criticized for story selection and right-leaning tone, drives home that point.

But then he and Burns spent the rest of the segment breaking down Glenn Beck – or trying to. “Glenn Beck barely mentioned the health care bill for the first 45 minutes,” said O’Donnell (our count had it around 20 minutes) and they picked up on a gun reference made late in the show.

Burns called it a “continuing part of Glenn Beck’s ongoing campaign to destroy the progressive movement, and frankly I’m concerned, perhaps even incite a revolution in this country.” Is it true some could misinterpret what Beck says as a call to violence? Sure, but he continues to make the case against violence – as he did last night again.

The point is, Beck and his FNC colleagues are right-of-center politically and in the media, while MSNBC is left-of-center in both areas. So when O’Donnell charges “they’re not a news network, they’re a political operation” it ignores the messenger. Maybe it would mean more coming as a postcard from John King, USA.