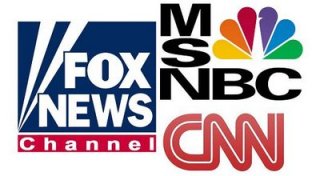 Over the past ten years we’ve repeatedly read stories in the MSM that the big three nightly newscasts are a dying breed. We’ve read that viewership continues to decline. And there have been prognostications that one of the big three will get out of the nightly news business eventually; usually the network hinted at is CBS because it’s been stuck in 3rd place, well behind NBC and ABC, for longer than most of us can remember.

The premise concerning the “eventual demise” of broadcast news and its slumping viewership generally revolves around two things; the explosion of cable news outlets over the past decade and the increasing reliance on the internet as a news medium – both deliver news quicker to those who want it and make the big three nightly newscasts seem both redundant and woefully late to the story because of their early evening air times. That’s the theory anyway.

It’s a theory I and others have steadfastly adhered to. I surmise this is partly why Brian Stelter started out his media writing career in 2004 with a lesser known precursor to TVNewser called CableNewser which focused solely on the six cable news nets at the time; CNN, HLN, MSNBC, FNC, CNBC, and Bloomberg TV. It wasn’t until Stelter sold CableNewser to Mediabistro and it was re-branded as TVNewser that it was then expanded to cover all TV news outlets, broadcast and cable.

At the time, I felt that the expanded coverage of TVNewser perpetuated the “myth” of broadcast news relevance while shifting the focus away from where the future really was, cable news. And that, among other reasons, is why I started blogging at ICN in 2005. As far as I was concerned broadcast news was dead. It was just that nobody had bothered pulling the plug yet.

But a strange thing happened over the past five years since ICN launched: the broadcast news programs remained relevant while cable news began to become less relevant on a daily basis for almost everyone except political junkies.

I started watching nightly broadcast news again a couple of years ago and I have come to some sort of Alice in Wonderland bizarro world epiphany. For news, the broadcast networks still do it right and cable news is increasingly doing it wrong. As one who blogs exclusively on cable news, this revelation has been a tough pill to swallow. How did my TV news world become so topsy turvy?

>>>NEXT PAGE: The first problem with cable news – ratings.