MSNBC’s Joe Scarborough Claims The Left Is ‘Hypocritical’ Regarding Libya 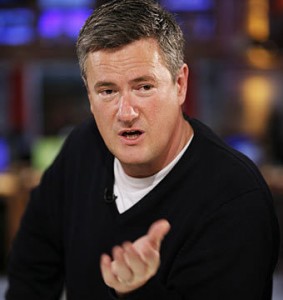 Joe Scarborough, host of MSNBC’s Morning Joe and a former Republican Congressman, took to Politico to air his grievances over the way Liberals have been discussing our role in Libya. In his piece, “The hypocrisy of the American left,” Scarborough writes: “How can liberals call for Qadhafi’s ouster when they opposed the war against Saddam?”

Not true! CODE PINK wants a ceasefire in Libya. The head of the organization, Medea Benjamin, has repeatedly called for an end to our involvement in Libya. She’s been on the teevee. She had a press conference at the White House last week. CODE PINK has highlighted the efforts of women in the Middle East working to bring about peace in the region.

Scarborough also noted – again, incorrectly – that anti-war protesters have backed away from Guantanamo Bay and that no one on the left is speaking out against our actions in Libya, and Linkins provides examples to the contrary.

The thing is, Scarborough has a point, albeit one buried and gasping for breath beneath the weight of too many broad generalizations. Says Linkins:

Let me be clear: I am nothing if not entirely willing to concede this point to Scarborough. I think, though, that it’s more than possible to discern a distinction between Democratic Party lawmakers and all liberals. If you want to level this charge against lawmakers, knock yourself out. But leave the rest of the “liberal” movement out of it, especially if you can’t actually make the case.

Scarborough also asserts that “Democrats streamed to the floors of the House and Senate to praise the president for invading Libya,” conveniently leaving out the Democratic lawmakers – like Dennis Kucinich and Anthony Weiner – who have taken issue with Obama’s tactics, if not with the invasion itself.

Linkins’ post is a worthwhile read, if only because it shows how sometimes, in order to make a point, those deeply entrenched in their own viewpoints tend to cherry pick information as it suits their argument. This isn’t to say, of course, that this sort of thing never happens on Linkins’ own Huffington Post, but, if people can’t ascertain a clear picture of reality (Because, really, who can ever fully trust a TV pundit or political blogger not to have a set bias?), then at least one can read different takes on an issue in order for that picture to grow a little less foggy.