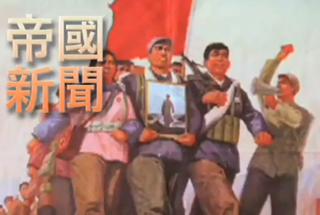 With the debate on raising the national debt ceiling fast becoming the most important debate currently on the House floor, candidates to become members of said House may be feeling the pressure to run on a platform that highlights their refusal to allow the debt to grow any further. But highlighting a take on policy and plain fearmongering are two different things, and it’s pretty clear in what category Nevada Republican House candidate Mark Amodei‘s “Chinese nightmare” ad falls.

At first, the ad appears like it may morph into a silly NMA news parody, but it quickly turns into a serious Chinese newscast from the future, detailing how America continued to spend money until the Red Army took over and because prosperous feeding on the carcass of our once great nation. Among the more cringe-worthy elements of the ad are the “translator’s” intentionally shoddy English, the classical Maoist imagery, and the cameo appearance towards the end by the candidate himself, promising to “stop this nightmare” and “never vote to raise Obama’s debt limit and risk our independence.”

The ad is, in essence, banking on the hope that constituents haven’t been following the debt ceiling debate or current events enough to quickly dismiss this Amodei’s “nightmare” as not possible for at least the next 100 years or so. China may still be communist, but it hasn’t been in full-speed-ahead Great Leap Forward mode for quite some time– in fact, it’s been heading towards capitalism more than anything else, keeping the especially disgusting elements of communism (political repression, lack of individual freedoms) but dispensing with much of the economic issues. What’s more, Amodei can’t technically do much to stop China from being communist, and the problems with the debt ceiling are so complicated, various, and generally headache-inducing that it seems at least slightly disingenuous to reduce the entire debt ceiling debate to “your kids will be speaking Mandarin if you don’t vote for me.” That said, campaign ads aren’t meant to make people think– they’re meant to make people curious enough to arrive at venues of thought, a candidate’s website, a debate or political function. Oversimplification of ideas– when ideas are present at all— is the nature of the beast.