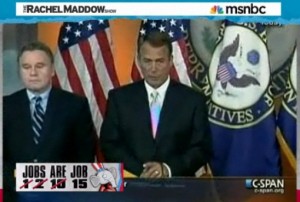 People of every political persuasion were rightly outraged when, in 2009, Whoopi Goldberg presented the odd defense of Roman Polanski that his crime “wasn’t rape-rape.” A new law, introduced by a GOP congressman and lauded by House Speaker John Boehner (R-OH), seeks to similarly redefine the circumstances under which public funds may be used to fund abortions by replacing the current “rape or incest” exemptions with something they call “forcible rape.” So far, the outrage is a bit one-sided.

The bill, “H.R. 3: No Taxpayer Funding for Abortion Act,” was introduced by Rep. Chris Smith (R-NJ), and has 173 co-sponsors, including ten Democrats. Not only does it change the longstanding “rape or incest” exemption to “an act of forcible rape or, if a minor, an act of incest,” it also contains provisions that could well lead to the end of abortion coverage by private health insurance plans.

While the US Criminal Code doesn’t define “forcible rape(the code places all forms of rape, including statutory, under the umbrella of the term “Aggravated Sexual Assault”),” federal crime-reporting standards do, and while they include rapes due to temporary or permanent incapacity, they specifically exclude one particular kind of rape:

Agencies must not classify statutory rape, incest, or other sex offenses, i.e. forcible sodomy, sexual assault with an object, forcible fondling, etc. as Forcible Rape (2a or 2b). The UCR Program applies the following definitions:

This exclusion is also found in most states’ definitions of “forcible rape,” where such definitions exist. So, while HR 3 might exclude drug-induced rapes (but likely would not), it definitely excludes statutory rapes, the type that Whoopi Goldberg also didn’t consider “rape-rape.”

While attempting to narrow the definition of rape is, itself, outrageous, the fact that the only unambiguous exclusion here will be little girls who are impregnated by adults is truly revolting. One of the bill’s Democratic co-sponsors, Rep. Daniel Lipinski (D-Il), assures TPM that this wasn’t his intent:

“The language of H.R. 3 was not intended to change existing law regarding taxpayer funding for abortion in cases of rape, nor is it expected that it would do so,” Lipinski said in the statement. “Nonetheless, the legislative process will provide an opportunity to clarify this should such a need exist.”

That’s hard to swallow, given the fact that aside from the “forcible rape” change, this provision is triple-redundant. Rep. Bart Stupak famously spurred President Obama to issue an Executive Order reinforcing a prohibition that already existed in federal law. Stupak, who ironically accepted abortion money for his campaign, was called a “baby-killer” for his trouble.

So, why do 164 Republicans and 10 Democrats hate little girls, unless they’re raped by a close relative? My initial read of this bill is that they don’t, that what they really want to do is promote the notion that , absent this “forcible rape” language, women will just go around “crying rape,” a popular myth in American rape culture. Rape is actually a woefully underreported crime.

This is reinforced by the reductive attitude that abortion rights opponents take toward “health of the mother” exemptions, best exemplified by Sen. John McCain’s air-quoted suggestion, in a 2008 presidential debate, that such concerns are merely pretext to secure taxpayer-funded abortions:

The condescension drips like the back end of a Tijuana air conditioner, and is of a piece with the anti-woman thrust of this bill.

Either way, it’s not a very pretty choice. Time will tell if Smith  & Co. generate as much outrage as Whoopi Goldberg did.

A little over a week ago, Rachel Maddow talked about this bill with Rep. Jan Shakowsky (D-Il), and while they missed the “forcible rape” language, they did talk about the bill’s many overreaches, most importantly this section:

(2) for purposes of determining any deduction for expenses paid for medical care of the taxpayer or the taxpayer’s spouse or dependents, amounts paid or incurred for an abortion or for a health benefits plan that includes coverage of abortion shall not be taken into account, and

(3) in the case of any tax-preferred trust or account the purpose of which is to pay medical expenses of the account beneficiary, any amount paid or distributed from such an account for an abortion shall be included in the gross income of such beneficiary.

That means anyone who has an insurance plan that covers abortions, even a single man who will never have an abortion, will be denied any health care related tax benefits. That would even apply to dudes who work for the RNC, whose health plan covers elective abortions.

The likely result of this will be that group health insurance plans will stop covering abortions altogether.

Here’s the clip from the January 24 edition of The Rachel Maddow Show, from MSNBC”