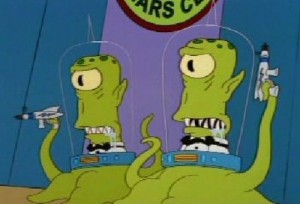 New York Times Executive Editor Bill Keller‘s column for this week’s Sunday Times magazine, “Asking Candidates Tougher Questions About Faith,” is getting angrier buzz than a beehive at a piñata party. Most of the outrage centers on Keller’s clunky comparison of religion with a belief in space aliens, and the sense that he’s picking on Republicans. What does the Bible say about all of this, are candidates’ religious views fair game, and is Keller’s column just another excuse to highlight Mitt Romney‘s Mormonism?

Keller’s opening is obviously designed to grab attention, and while the effect may seem to be to trivialize religion, the intent appears to be to draw a distinction between Keller’s questions, and the specter of religious bigotry that makes people squeamish about the subject:

If a candidate for president said he believed that space aliens dwell among us, would that affect your willingness to vote for him? Personally, I might not disqualify him out of hand; one out of three Americans believe we have had Visitors and, hey, who knows? But I would certainly want to ask a few questions. Like, where does he get his information? Does he talk to the aliens? Do they have an economic plan?

Yet when it comes to the religious beliefs of our would-be presidents, we are a little squeamish about probing too aggressively.

Keller goes on to explain that he “honestly doesn’t care” about “beliefs that will seem bizarre to outsiders,” but proceeds to tick off several of Romney’s anyway, such as whether he “wears Mormon undergarments beneath his Gap skinny jeans.”

In a comparison that’s sure to thrill my friend Bill Press, Keller equates such Mormon doctrines with the Catholic belief in transubstantiation. He also recalls, as a young boy, “being mystified and hurt by the speculation about John Kennedy’s Catholicism — whether he would be taking orders from the Vatican,” yet reserves the right to question GOP candidates over whether they “place fealty to the Bible, the Book of Mormon (the text, not the Broadway musical) or some other authority higher than the Constitution and laws of this country.”

I’m not seeing a bright line here, but Keller’s question is somewhat moot. Which candidate does he expect to confess that his or her religion is at odds with the Constitution? The second part of that question, “the laws of our country,” reveals the flaw in almost all of Keller’s questions for Republican candidates: they can all be asked more fairly, and without the issue by making it about the candidate’s religion, by decoupling them from religion altogether. For example, Keller asks, “What do you think of  the evangelical Christian movement known as Dominionism and the idea that Christians, and only Christians, should hold dominion over the secular institutions of the earth?”

He could as easily ask the candidates if they believe in discriminating on the basis of religion, or if voters should do so, and avoid the subject of the candidate’s religion. Why is this desirable? Well, aside from steering clear of reducing entire religions to a sound byte, it offers the candidates fewer “outs” (they can’t turn the response into a treatise on interpretive religion), and it gives a fuller picture of what the candidate really thinks. Theoretically, a candidate could truthfully answer “no” to Keller’s question, and still not appoint any Muslims.

On the other hand, there’s a case to be made that answering these questions provides candidates with an opportunity to prove themselves in the eyes of believers and non-believers alike. Religion and politics blogger Lady of Light, a self-described Fundamentalist Christian (full disclosure: she’s also my mom), agrees with Keller that candidates’ religious views are fair game. She gives several Bible-based reasons for this, but I found this one the most compelling:

“Study to show thyself approved unto God, a worker who need not be ashamed, rightly dividing the word of truth.” This indicates that people should be knowledgeable about what they believe and that it should be based on a sound understanding of the word of truth.

If these politicians are not just using “religion” to attract people, they will show themselves approved by God by answering questions about their faith in line with the “word of truth” that is contained in God’s word.

Simply put, a candidate’s religious views ought to be able to not just withstand scrutiny, but shine under it.

In reality, religion is not the dividing line of fairness here, but rather, how and why the questions are being asked. I don’t know what’s in Bill Keller’s heart, but if someone were to assess his Republican candidate questionnaire as nothing more than a way to push-poll their  religious views, it would be tough to argue against it. On the other hand, Keller’s piece could also be an elaborate bit of satire, designed to belatedly demonstrate the folly of similar efforts to dissect and demonize the religion (real or imagined) of Barack Obama. Maybe it’s both.