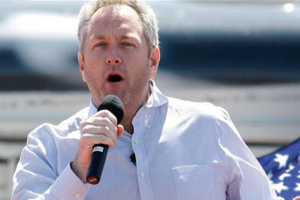 A few days ago, the New York Times ran a correction on an article about the Tea Party. In it, they note that there is no proof that Tea Party supporters shouted racial epithets at Congressman John Lewis. Another feather in the cap of Andrew Breitbart, surely, but one news outlet for him is not enough when so many others have yet to do the same.

In an extensive Big Journalism column today, the website’s proprietor notes that, “buried at the bottom of a story the other day,” the Times had given him an apology that he had spent an enormous promotional effort procuring– some might even say the Shirley Sherrod drama was fueled by a desire to see the left have to prove themselves not racist in the same way Breitbart perceived the Tea Party to have to do. “That’s great,” he comments, and that’s about all that he’s giving the newspaper, following with a stream of reasons for why one apology is not enough, and does not vindicate the media to him:

“It’s not enough because the Times correction is just the beginning. The same correction needs to come from every other major media outlet that blithely repeated this defamation, including the AP, the Washington Post, The Hill, and MSNBC – not just in their news columns, but in their editorials, op-ed and opinion columns and shows as well. Until then, there will be no closure, because the Tea Party will not stop in its pursuit of vindication until the same media effort that went into propagating this lie goes into dispelling it and giving the millions of Americans – 23% of whom are minorities, according to Gallup — their good name back.”

On his Twitter feed, he also added to the usual suspects CNN’s Anderson Cooper, who also apologized to Breitbart last week for not questioning Sherrod’s claim that he was in favor of slavery. And, of course, he highlighted once again the masterminds behind the “cynical political ploy” to distract from policy issues: “President Obama and elected Democrats… with the help of their media allies and activist groups like the NAACP and the Congressional Black Caucus.”

The rest of the column returns to the usual Breitbartian themes of “racist” being the worst label in American politics and the Mainstream Media’s insistence on promoting their agenda. To paraphrase former Vice President Spiro Agnew, you’ve seen one Breitbart column, you’ve seen them all. That’s not to discredit him however, as the current pool of public facts– the dozens of YouTube videos showing no proof of racial epithets having been shouted by Tea Partiers at black congressmen– are on his side. On the other side? The congressmen themselves, and, among others, CNN reporter Dana Bash, who claims to have personally heard some “ugly things” at the rally, and that her staff heard epithets against Rep. Barney Frank. In other words, it’s a classic “he said, she said,” and the only thing remotely resembling evidence is on Breitbart’s side, but few on the left dare trust him.

At the core of this story (or non-story) is the trust of the American people in their media, whether that be the New York Times, CNN, MSNBC, or Breitbart’s blog ring. When, in the past, people would trust news sources solely on the basis of their existence as national corporations, the democratizing effect of new media has exposed the fact that the “objectivity” previously taken for granted is practically impossible. It’s not rare to find people concerned for the state of journalism when so-called “objective” reports can’t be trusted, but it’s actually a quite healthy evolution of the American collective psyche. Every news story is a remake of Rashomon; every report is inherently biased.

This was as true when there was only an evening news broadcast as it is today with the advent of 24-hour news via TV and internet. Even in cases where there is a deliberate attempt at objectivity, stories get spun– think CNN going through pains to present “both sides” of the Civil War– and apologies are only offered when the base that trusts the source begins to appear wary of it, as the Times did here. In the context of Breitbart’s apology requests, this means that it’s likely only news sources who see a danger for their credibility in not apologizing will do so, so Breitbart had better hope the average MSNBC viewer starts to feel that they can’t trust the network because Andrew Breitbart says so (good luck with that).