President Obama: Change No One Can Believe In Anymore?
video

President Obama: Change No One Can Believe In Anymore? 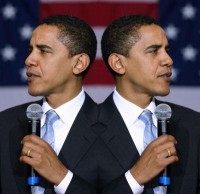 So! 2009 is almost over. The health care bill has passed. President Obama has announced his plan for Afghanistan. The midterms are still eleven months away. What will we talk about? If some of the coverage these last few days (from normally stalwart Obama supporters) is any hint, it’s likely the focus between now and the president’s State of the Union address is going to on Obama’s sinking popularity and everything he has done wrong in the last…eleven months.

On Tuesday Time ran a piece by Michael Scherer about why the president should actually be concerned about his dropping poll numbers because it’s not just the economy, stupid. Though that’s a big part. Also a problem is the fact that Congress’ support tends to dwindle with the country’s and “change we can believe in” has become change we can’t be bothered to vote for.

The 2009 elections in New Jersey and Virginia were initially talked about by Obama allies as a test of the President’s organizing power. By the time the votes were counted, however, with Republicans winning two Democratic seats, no one at the White House wanted to claim any responsibility. That’s because the remarkable enthusiasm that greeted Obama’s victory in 2008, with record turnout among independents, blacks and young people, had gone away, along with the minions of Obama organizers…the enthusiasm gap bodes poorly for 2010, when Obama will be trying to minimize losses in the House and the Senate. According to the recent Battleground poll, just under two-thirds of Democrats say they are extremely likely to vote in upcoming elections, compared to 77% of Republicans and Independents.

Wow. Easy come, easy go, I guess? Meanwhile, traditional Obama media stalwarts like HuffPo, which basically built its online dominance on the back of the Obama campaign is now running banner headlines like “Now Obama Gets Involved: President Pledges Hands-On Role Merging Bills.” Snap! Even Chris Matthews, he of the shivering leg, sounded a tad cynical last night about whether and how Obama has been keeping any (all?) of the promises he made during last year’s campaign. And Salon’s Joan Walsh sounded downright skeptical about Obama’s near invisible support of the public option. (Video below).

I’m a pragmatist. I still have to say Obama got both sides mad at him. The left is not happy with him, we’ve heard from lots of diff senators that the president never pushed this, he never twisted any arms.

Change of this magnitude is extremely hard. That it is also frustrating, inadequate, compromised, flawed, and beset with bribes and trade-offs does not, in my mind, undermine it. Obama told us it would be like this – and it is. And those who backed him last year would do better, to my mind, if they appreciated the difficulty of this task and the diligence and civility that Obama has displayed in executing it.

“Inadequate, compromised, flawed, and beset with bribes and trade-offs” also does not make for easy headlines or quick content, neither does an always bad economy, so it may be a while — a long while if circumstances remain unchanged — before we get back to the victorious change you can believe in meme. Matthew’s video below.