President Trump Has Successfully Desensitized Us to His Pathological Lying

President Trump Has Successfully Desensitized Us to His Pathological Lying 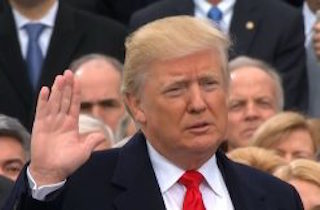 I may never live down predicting that now President Donald Trump didn’t have a realistic chance of winning the Electoral College. Many of my projections about him as a president, however, have turned out to be right on the mark.

Among those are the assertions that Trump is a pathological liar, that the news media is poorly equipped to handle a liar of this magnitude, and that, to his great advantage, we would all quickly become desensitized to his lies.

If we didn’t know all of this already, the last week has proven it to virtual certainty.

– He helped write Don Jr.’s fantasy “adoption” cover story for the Russia meeting (which also makes it VERY likely that he also lied about not knowing about the meeting to begin with).

– He falsely claimed that the Boy Scouts called him to tell him that his controversial speech to them, for which they were forced to apologize, was the best they have ever hosted.

– Similarly, he lied about a phone call with the president of Mexico.

– He claimed, contrary to a Golf Magazine (a publication he has praised in the past because it has been almost Fox News-like in its coverage of him) article that he never told members of his Bedminister, New Jersey club that the “White House is a dump.”

– We learned that Trump’s February 3rd tweet claiming that a story about a bizarre phone call with the Australian Prime Minister was “FAKE NEWS” was (surprise!) a lie.

And these are just the lies that we know about, are important enough to matter, and have enough evidence about which to make sound conclusions. I am confident that there are others. Amazingly, the pure brazenness and quantity of Trump lies actually is working, at least in part, to his benefit in several ways.

One is that a liar who is untethered to any normal sense of reality has an inherent advantage under the rules of modern discourse. This occurs for three basic reasons.

The first is that a liar with no conscience can say that 2+2= 100, while the truth tellers can only retort with 2+2=4. An understandably cynical public then concludes that the real answer must be somewhere around 51. The liar automatically wins in that equation.

The second is that, in this era of super-short attention spans, the first definitive narrative usually wins the day, or at least keeps your base of support from abandoning you. Because everyone is rightly hesitant to immediately call out the President of the United States as a bald-faced liar, it usually takes far too long for enough evidence to emerge to support such a claim of dishonesty being made by major news media. By the time it does, everyone has moved on and the impact is very limited.

Third, the sheer magnitude of all the lies makes us all desensitized to all of it, thus negating any real consequences for each individual lie. The news media moves on from each lie to the next juicy whooper so quickly that none of them ever get drilled deeply into the public consciousness. I am convinced that the “Boy Scout” story, with any other president, would be something we NEVER would forget. With Trump, it has mostly become ancient history just a couple of days later.

Trump has effectively inoculated himself against charges of dishonesty (at least among his political base) and is now immune from most of the lying-related diseases which used to be politically fatal. The best example of this bizarre phenomenon is probably President George H.W. Bush. The man was seen, correctly, as extremely honest, so when he promised, “Read my lips, no new taxes,” and it turned out to be a lie, he had no immunity from this infection and was soundly defeated in his run for reelection.

So what is really going on here? Why is Trump even blatantly lying about things which don’t even seem to matter very much (except to his own ego)?

CNN’s Kristen Powers posed the interesting theory that maybe he doesn’t even realize that he is lying and that he really believes that these events, all of which make him feel better about himself, actually happened. Given that Trump has a major case of what I call “Celebrity Disease” (an affliction where you come to think that nothing you ever do can be wrong because no one close to you ever tells you that it is) I think this concept may be part of what is going on.

For example, his denial of the Golf Magazine story could be an incredibly stupid lie, or it could be a result of this psychological defect he has. I found it rather appropriate that if this lie is indeed the latter, that it is perfectly in keeping with his modes operandi on the golf course itself.

Much like his old buddy and kindred spirit Bill Clinton, Trump is infamous for taking “mulligans” on the golf course. A “mulligan” is where you pretend that your first crappy shot never really happened. In a very real sense, Trump may have just convinced himself that the “White House is a dump” comment never really happened because he took a “mulligan” on it.

But let’s be clear that, regardless of his level of mental illness, there is no doubt that some very real and dangerous lying is definitely going on here. I have said many times that Trump’s use of “Fake News!” was simply an easy way for him to discredit (again, with his base) negative stories without having to get into the details, or even provide an alternative explanation.

It has never been more obvious that “Fake News!” is really just code for: True stories that make me look terrible but which I can, at least temporarily, convince my cult following are false because they have already been trained to hate the news media so much that they literally can’t see straight.