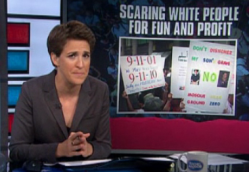 Rachel Maddow returned from last week’s secret trip to Baghdad and jumped right into the Lower Manhattan mosque controversy. Maddow’s explanation for the recent furor over the building is this: It’s merely “this month’s new scare white people story.”

You will likely recall that last month Maddow accused Fox News of ginning up the Shirley Sherrod tape debacle in an effort to “scare white people” and as a result Maddow thinks between that and ACORN and Van Jones and the Black Panthers we should be “familiar with the formula.” Says Maddow:

What’s worth noting about all of these different ‘scare white people’ stories is that they’re not really actual news stories. No real news organizations started running with this story as actual news. The best ‘scare white people’ stories are invented out of whole cloth, from inside the conservative media world so they can be the just right kind of scary, in just the right kind of way, in order to drive the just right political consequences. So ultimately if the conservative media drives this to make it big enough than normal news organizations pick it up too, sometimes because they’re guilted into it by conservatives. But no non-Fox News, non-conservative media outlet ever starts these things.

And she has a point. That has been the (successful) trajectory of most of these stories. And this mosque story was not news until the New York Post and subsequently Sarah Palin stoked it up and media outlets hungry for headlines jumped in. However, unlike some past examples Maddow offers, this one seems to have taken on a very real, possibly dangerous life of its own. As Salon‘s Glenn Greenwald noted, this ain’t no August news story anymore: “The Park51 conflict is driven by, and reflective of, a pervasive animosity toward a religious minority — one that has serious implications for how we conduct ourselves both domestically and internationally.”

On Sunday Maureen Dowd said “the unbottled anger and suspicion concerning ground zero show that many Americans haven’t flushed the trauma of 9/11 out of their systems.” And I think she also may have a point, some of the “protests” in Manhattan this weekend weirdly felt like a long-delayed reaction to 9/11.

Maddow, meanwhile, worries that without any “adults around to hit the brakes” the far, far right wing of the conservative party is now being allowed to drive the national conversation on Islam. Watch the segment below.