Rand Paul’s Filibuster Should Be Uniting The GOP, But Instead Risks Tearing Conservative Coalition Apart

Rand Paul’s Filibuster Should Be Uniting The GOP, But Instead Risks Tearing Conservative Coalition Apart 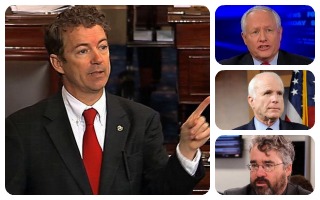 Kentucky Sen. Rand Paul’s marathon filibuster could have injected new life into the moribund Republican Party. Instead, today, Paul’s actions are tearing the conservative coalition apart. The party’s old guard is having a fit at the impertinence of the new. Long-time libertarians are aghast at the praise Paul has received from Republican commentators they have for years dismissed as reactionary neoconservatives. The Republican Party – as they have been wont to do in the era of President Barack Obama – is busily engaged in snatching defeat from the jaws of victory.

“If Mr. Paul wants to be taken seriously he needs to do more than pull political stunts that fire up impressionable libertarian kids,” sneered Sen. John McCain (R-AZ) on the Senate floor in reaction to Paul’s 13-hour filibuster of the nomination of CIA Director John Brennan.

“Calm down, Senator,” the members of the Wall Street Journal editorial board wrote dismissively. They called Paul’s filibuster a “rant” and mocked his “theatrical timing.” “If only his reasoning matched the showmanship,” the board mused.

“He knows that jumping on the Rand Paul black helicopters crazy train isn’t good for our Party or our country, no matter what Twitter says,” an unnamed aide to Sen. McCain told BuzzFeed.

“Will it ultimately serve [Paul] well to be the spokesman for the Code Pink faction of the Republican Party?” asked The Weekly Standard editor Bill Kristol on Fox News Sunday. “How much staying power is there in a political stance that requires waxing semi-hysterical about the imminent threat of Obama-ordered drone strikes against Americans sitting in cafés?”

“Is embracing kookiness a winning strategy for the Republican party?” Kristol concluded rhetorically.

The mockery that Paul has received at the hands of some of his fellow Republicans is a two way street. Mediaite’s own libertarian columnist Andrew Kirell called some of the nation’s right-leaning commentators, like conservative radio hosts Laura Ingraham and Rush Limbaugh, as well as tea-party leaning Republicans like Sens. Marco Rubio (R-FL) and Mitch McConnell (R-K), “bandwagon jumpers” for their praise of Paul’s actions despite their previous positions on civil liberties.

“[S]ome of his newfound fans seem to have simply sensed the direction of the wind and hopped on a bandwagon to avoid looking out of touch,” Kirell wrote:

Plenty of the Republican politicians and talking heads who are suddenly “concerned” about due process in the War on Terror would undoubtedly be jumping in line to defend the same secretive policy from the “LIBERAL MEDIA” if this were a Republican president (cough, cough, Rush Limbaugh and Laura Ingraham, cough, cough) and now likely stand with Rand because of how easily it can be construed as a purely anti-Obama movement.

“[I]f that’s what it takes to get Rush Limbaugh to say that he agrees with Rand Paul, that he’s open to these ideas, I’ll take it,” said the libertarian Reason Magazine’s senior editor, Brian Doherty, in an interview with Business Insider. He cast doubt on the idea, however, that any Republican was as supportive of the substance of Paul’s filibuster more so than the opportunity to score a political victory against the Obama White House.

The talking filibuster has an inherent “one man against the world” quality uniquely attractive to the disillusioned. The last talking filibuster, conducted by Sen. Bernie Sanders (I-VT) in December, 2010, in opposition to Democratic Party’s plan to extend the Bush-era tax cuts across the board, lit a fire within the progressive left. Overnight, “income inequality” became a struggle against injustice and arguably contributed to the rise of the Occupy Wall Street movement in 2011.

Perhaps unsurprisingly, a powerful minority within the Democratic and Republican coalitions were equally emboldened by Paul’s challenge to both this and, by extension, the last presidential administration’s unconstrained conduct of the global war on terror. Like the Occupy movement, the scope the impact Paul’s filibuster will have on American politics cannot be fully appreciated just yet.

For the conservative coalition of voters who either enthusiastically or reluctantly pull the lever for Republican candidates, an antipathy towards perpetual and ungoverned global warfare is on the ascendancy. Rather than reluctantly embrace this reality and guide the party’s transition, neoconservative officeholders and commentators would rather warn against what they see as a dangerous ideology. Instead of recognizing this spontaneous moment of revitalization for the GOP, they seek to stifle it.

Neither neoconservatives nor the little “L” libertarians are going to have the party they want in the short term. The former group still wrestles with the board perception that the Iraq war they championed was folly. The latter still struggles to reconcile the perfect with the good — a politically terminal condition. Both, in this case, are wrong.

Individual perceptions of the war on terror notwithstanding, Paul’s filibuster represented a shot across the White House’s bow over the conduct of drone warfare abroad and, hypothetically, at home. Republicans who disagree with Paul’s position on international interventionism should voice their objections behind closed doors. Libertarians displeased with the support of Republicans they deem ideologically impure would be better served by praising their change of heart rather than demanding they self-flagellate as penance for perceived past transgressions.

This is not a policy debate — It is a political one. By appearing divided, the GOP risks squandering the spoils of Paul’s political victory. By seeming united, they force the White House into a defensive posture which could result in future opportunities for political gain. This choice, one would think, is an easy one.