Remember When Future Not-President Paul Ryan Was Also Never Going to Be Speaker? 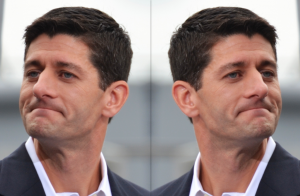 The Speaker of the House of Representatives — Wisconsin’s Paul Ryan — is facing untold calls and questions from just about every conceivable media outlet about the possibility of him being the Republican party nominee for President. After all, in the event of a brokered/contested/sh*tshow convention in Cleveland this summer, everyone wants to know who from among the GOP establishment will step forward and properly take the reins, putting this circus out of its misery once and for all.

Many names have been put forward in addition to Ryan’s of course; former party nominee Mitt Romney has long been rumored to be the one the right is looking for in 2016, and was asked by TODAY’s Matt Lauer last month if he would “ride in on a white horse” to save the day. At the end of February, even former Texas Governor Rick Perry admitted that it would be “a whole new ball game” if the party could not pick a consensus candidate prior to Cleveland. Perry never excused himself from such consideration.

Which brings us back to Paul Ryan, the best shot at reasonable charisma and youth that the Republican party has to do damage in a general election. Speaker Ryan was praised two weeks ago by both the right and the left when he blasted the totality of the 2016 campaign rhetoric. “How many of you find yourself just shaking your head at what you see from both sides?” Ryan asked the room comprised of congressional interns. He continued, “Our political discourse — both the kind we see on TV and the kind we experience among each other — did not use to be this bad and it does not have to be this way.”

The questions continue for Ryan as to whether or not he would consider being that proverbial savior for a badly-fractured conservative political movement here in 2016. After all, as a well-liked Vice Presidential candidate in 2012, Ryan was on the Romney ticket that accrued 47.2% of the nation’s popular vote during President Obama’s reelection campaign. The pro-Ryan chatter is so loud that RNC Chairman Reince Priebus had to clarify to CNN’s Jake Tapper on Sunday’s State of the Union that a Ryan nomination is “highly highly unlikely.” Priebus added “I think our candidate is someone who is running.”

Even as far back as December, Fox News’ Bill Hemmer brought up the subject of a contested convention to Ryan, noting that the House Speaker was, “considered a unifier in the party now.” (Paul emphatically noted to Hemmer then, “No, I’m not considering that possibility, and I think this talk is ridiculous.”). Adding fuel to this fire more recently was former House Speaker John Boehner, who said of the current Republican field, “If we don’t have a nominee who can win on the first ballot, I’m for none of the above… I’m for Paul Ryan to be our nominee.” POLITICO’s Mike Allen reported this morning:

Go figure. And just this morning, conservative radio host Hugh Hewitt cornered Ryan on the same issue, and again, the House Speaker repeated his defiant claims that he would not seek his party’s nomination:

.@SpeakerRyan spoke with @hughhewitt this AM from Israel & continued to dismiss the idea he could be the GOP nominee pic.twitter.com/SlcjLd2OdW

“I’m not that person,” remarked Ryan to Hewitt today. But maybe the reason that people in the political media sphere can’t get enough of the Ryan-as-nom storyline is because it truly would be the biggest F-You-exclamation-point-fireworks-extravaganza to this nutso reality show. In the cycle when every inconceivable thing has happened — Retweets and manhood comparisons gone wild, proposed banning of religious groups, a death of a Supreme Court Justice — the prospect of Paul Ryan earning the nomination would really be the heightened final beat of a comedy sketch eighteen months in the making.

Or maybe there’s another reason. Let’s roll the clocks back to October 8th, 2015. Shortly after 12:30 p.m. ET, headlines rang out that Kevin McCarthy, the heavily-favored pick to succeed Boehner as House Speaker, stunningly revealed that he would not seek the position after all. Within minutes — literally — the fire grew so hot on the idea that Paul Ryan would be the suitable choice that the man himself had to release a statement while McCarthy was still clearing the spinning cartoon stars from his dazed vision.

Full statement from Paul Ryan on McCarthy. “I will not be a candidate.” pic.twitter.com/S5VVLB1B1j

“I will not be a candidate,” said the man who eventually become a candidate. And now with the conservative base as terribly broken as anyone can remember — and a delegate race heating up between two candidates of arguably equal ill repute with GOP bigwigs — it’s clear why no one believes Paul Ryan when he says he would not consider a run in Cleveland. He’s been down this path before; and just like in October, when he was viewed as the only reasonable, unifying voice at a time of great party uncertainty, look for more Republicans to likewise turn back to Ryan and push for a nomination that they can all actually get behind.