Republicans Say Obama Moved Dems To The Left, But They Must Not Be Paying Attention

Republicans Say Obama Moved Dems To The Left, But They Must Not Be Paying Attention 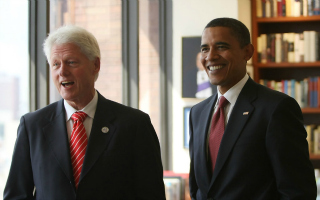 In a recent conference call with reporters, Newt Gingrich claimed that President Obama is the “anti-Clinton” because while “Clinton was trying to move the party to the center…Obama has moved it to the left.” While it is amusing to hear Bill Clinton‘s name on the favorable side of a comparison made by Gingrich, the statement was all the more remarkable because it simply isn’t true.

On issue after issue, the president has positioned himself as a centrist and a pragmatist, not a left-winger: Private insurance-based health care reform; the most hawkish Democratic foreign policy in a generation; milquetoast financial reform; a refusal to push for any new gun control despite a string of mass shootings — the list goes on and on.

Health care reform provides one of the more direct contrasts between the supposedly ‘centrist’ Clinton and ‘left-wing’ Obama. President Clinton’s plan involved a far larger role for government in regulating the insurance industry through plans for a National Health Board and health care ‘alliances’ across the country. These reforms actually tried to change the nature of the industry, while ObamaCare expands the private-insurance market virtually as is. Don’t forget that the adopted version of the bill was primarily written by Sen. Max Baucus (D-MT), who has major ties to the health care industry and a 38 percent “liberal action” score from ThatsMyCongress.com.

Though he has wound down the war in Iraq and plans to do the same in Afghanistan, President Obama cannot be called a dove. President Clinton declined to use U.S. power to stop a clear humanitarian crisis in Rwanada in 1994, but President Obama seemingly had no problem using U.S. military in support of the Libyan rebels in 2011. President Obama has expanded drone strike operations, much to the chagrin of any of his civil libertarian supporters, and even authorized the killing of a U.S. citizen-turned-Al Qaeda operative. He has easily been the most hawkish Democrat since the 1960s and has neutralized the age old argument that Democrats are weak on foreign policy.

Speaking of wars, President Obama has also escalated the War on Drugs — a pet battle of the right — to new levels. While the president stated categorically in 2008 that he would “not be using Justice Department resources to try to circumvent state laws on [medical marijuana]”, his Justice Department has been more stringent in prosecuting medical marijuana dispensaries than George W. Bush‘s. The administration frequently cites its authority to enforce federal drug laws over more liberal state laws, which in some states has held up the implementation of even moderate liberalization policies. The president even finds himself to the right of conservative luminaries like Pat Robertson on the issue.

While the left clamored for the reinstatement of Glass-Steagall and similar New Deal-era financial regulations, President Obama let Sen. Chris Dodd (D-CT) and Rep. Barney Frank (D-MA) compose a financial reform bill best described by Matt Taibbi as not “cleaning up Wall Street, [but] cleaning out Wall Street – throwing a ‘yes’ vote at a bank-approved bill to get them to pony up in an election year.” Here, the two presidents are more alike. President Clinton signed the original repeal of Glass-Steagall that allowed commercial banks to use their cash for investment banking for the first time in 70+ years. President Obama and the Democrats of the 111th Congress similarly won a widely derided, industry friendly ‘victory’ on financial reform that allows banks to use billions in ‘Tier 1’ capital, despite the inclusion of the ‘Volcker Rule’.

Since beginning his run for the White House in 2007, President Obama has moved (quietly) to the right of the Democratic caucus on gun control. In 2009, he signed a consumer protection bill to which Congress had attached a presumably unrelated amendment: the right to carry loaded fire arms in national parks. In his hometown of Chicago, the murder rate has spiked 30 percent this year alone. Gun massacres have taken place in Tuscon, Aurora, and Oak Creek during his tenure. Despite the endless tragedy wrought by our national obsession with guns, the president has provided nothing but rhetoric on the issue. President Clinton, on the other hand, lobbied for and signed the Brady Bill and the Federal Assault Weapons Ban in his first term alone.

Finally, some on the left have been none-too-happy with the president on civil liberties issues. He has been unable to close the detention facility at Guantanamo Bay as he promised during the 2008 campaign, and he signed the 2012 National Defense Authorization Act, which allows for unprecedented military involvement in law enforcement. To be fair, it is hard to say where Clinton would fall today on these issues, as he governed in a pre-9/11 world; but regardless, it would be difficult to call President Obama’s policies on the issue decidedly “left-wing.”

Despite the President’s continually center-right stance on issues dear to the left, the GOP has spent the last three-and-a-half years painting him as the second coming of communist icon Ché Guevara. At least on the national stage, President Obama has never been a dyed-in-the-wool liberal. He didn’t run for president as one, and he hasn’t governed as one. His attempts to compromise with the Republicans and moderate Democrats have been consistently condemned by the “professional left” (Robert Gibbs‘ phrase, not mine).

President Clinton built a Democratic bridge to the 21st century, and President Obama has walked clear across it.