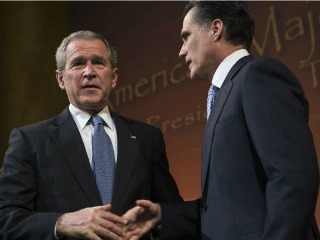 As The Maddow Blog points out today, RNC press secretary Alexandra Franceschi recently shared that, as she sees it, the 2012 agenda for the party is not distinct from those under Bush/Cheney, simply a new version. “I think it’s that program,” she said in an interview, “just updated.”

Maddow Blog writer Steve Benen notes that the challenge presumptive GOP frontrunner Mitt Romney and the party as a whole are contending with right now is that of putting “some distance between themselves and the debacle of the Bush presidency.”

“This would be easier, of course,” he writes, “if Romney hadn’t brought on so many Bush aides as his top advisors, while pushing a policy agenda that’s eerily similar to Bush’s vision, only more right-wing.”

Obama campaign communications director David Axelrod made a similar assessment on CNN’s State of the Union this weekend, comparing Romney’s policies to those of Bush and adding that they are “backward-looking and a repeat of what got us into this mess in the first place.” Washington Post columnist Ed Rogers, meanwhile, disagrees not only with Axelrod’s remarks, but with the strategy at play in tying Romney or the GOP moving forward to Bush and his policies.

“It is remarkable to me,” he writes, “that the Obama campaign still believes that Obama can blame Bush. It is obsessed. Whatever economic problems Bush caused, voters think by now, Obama should have been able to solve at least one of them — any one of them.”

Have a listen to Franceschi’s comments, below: