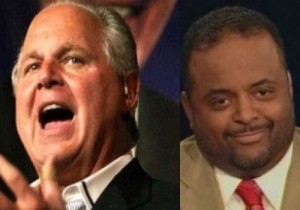 On Friday, Rush Limbaugh spoke with a high school student who phoned into his radio show asking for advice on a report he was writing about racism in the mainstream media. Limbaugh observed that Roland Martin had just written a Tweet about racism in America.

I simply accept the reality that racism is in the DNA of America. And when that button is pushed, the true feelings come tumbling out!

“There is a tweet today, don’t know what caused it. But there’s a black CNN journalist named Roland Martin…” Limbaugh said.

Roland Martin is a friend of Obama’s and here is his Tweet: “I simply accept the reality that racism is in the DNA of America and when that button is pushed the true feelings come tumbling out.” You asked me about racism and the media, well, here is a black journalist at CNN. I don’t know what this is relating to but again Paul, “I simply accept the reality racism is in the DNA of America.” So here is a mainstream journalist who just lives with the assumption that this is a racist country. Always there. And in his case is first because he’s black, but he’s liberal first. All liberals are liberals before they’re anything else, if they’re Jewish, if they’re gay, female, male, they’re liberals first, Paul. That is their religion. And that religion requires loyalty. You must have faith in them. They are the equivalent of your higher power. You must trust them; you must let them manage your affairs. This guy tweeting today that racism is in the DNA of America, so we are as a country founded in a flawed, sinful way. We are unjust as a country, it’s immoral as a country, and that belief allows Mr. Martin excuse to be able to have power over people, To be able to punish people he thinks are racist.

Limbaugh told the student to include that particular anecdote in his report.

Martin got word of Limbaugh’s mention of him on the radio and sent out a flurry of responses.

I hear the substance abuser @rushlimbaugh just shouted me out based on one of my tweets. Hit nutty fans are now tweeting me

Hey @rushlimbaugh, when you’re man enough to debate me, give me a call. Your Black producer, James Golden, has my #.

You @rushlimbaugh, play on the race issue ALL OF THE TIME. So stop acting like a punk & that you’re shocked. Get a life.

See, folks, @rushlimbaugh is like a bad child starved for attention. And he feeds off of his no-thinking groupies. #tcot

So a Black hockey player scores the winning goal & that is reduced to calling him the N-word? Call THAT hateful @rushlimbaugh!

Listen to Limbaugh’s comments on Martin below: