Rush Limbaugh: ‘If [Palin] Is Afraid To Run, The Media Terrorists Have Won’ 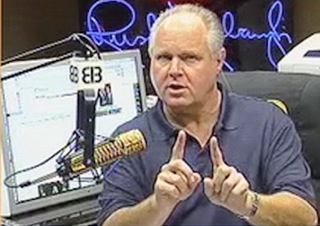 Rush Limbaugh has made no secret of wanting Sarah Palin to run for president in 2012. His callers, for the most part, seem to agree. But although Limbaugh is willing to let Palin slide if she prefers to continue her current lifestyle and not throw her hat in the ring, he made one thing clear yesterday morning: the one reason he will not accept for her to back out is fear. “If she is afraid to run,” he told his audience, “the media terrorists have won.”

In the middle of a conversation with caller “Vinny,” Limbaugh noted that the media had spent the past three years trying to destroy Palin definitively. Vinny agreed, “because they’re scared to death of her.” Thanking Vinny for his call, Limbaugh went on to note that the “conventional wisdom is that she’s not running,” noting her “good living” and “traveling around” and plenty of things that would dissuade her from running. However, “if she’s afraid to run, then the media terrorists have won.”

Limbaugh then went on to explain how the media became what it is now in his eyes– through the fall of President Richard Nixon. “Ever since the media took down Richard Nixon is when [sic] the whole reason why people want to get into journalism changed,” he argued, noting that people now enter journalism to try to “destroy somebody,” but that there was also a duty among conservatives to fight back. “If you’re willing to let the media take our people out, fine,” he advised his audience. “Stop complaining about being liberal.”

The segment from Friday’s program below: