Rush Limbaugh: First Lady Was Booed At NASCAR Event Due To Obama’s ‘Uppity-ism’ 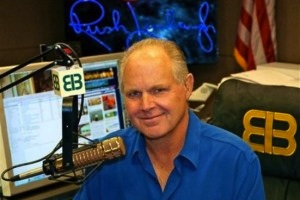 Some people might be surprised that there are those out there who would take it upon themselves to boo the First Lady of the United States. Not Rush Limbaugh. Nosiree, Bob. When Limbaugh listens to a bunch of NASCAR fans booing Michelle Obama and Dr. Jill Biden, he’s surprised that other people are surprised. Speaking to those people (namely the media), Limbaugh said the boos should simply be expected due to the First Family’s “uppityism.”

For those of you that don’t understand what Limbaugh means by the term “uppityism” (besides the obvious race-baiting to piss off liberal bloggers), I’ll let him explain the racing fans’ beef with “Moochelle” (it never stops being funny, Rush!):

Yeah, Michelle! How dare you not let NASCAR fans be fat! Especially when you’re so fat, yourself! Or something. Honestly, I get Limbaugh’s problems with the First Lady confused sometimes.

Anyway, Limbaugh was so incensed that he returned to the story later to give more reasons why the fans booed. So what horrible things did he say next? Well, this time he theorized that maybe people are just sick of being campaigned to and that they just want to watch a race without some dumb politicians waltzing around pretending to be interested and-

…oh my God. I totally agree with Rush on that. Whoa.

Listen to both clips from Limbaugh below