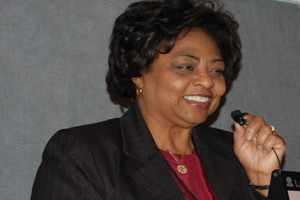 The woman at the center of the Andrew Breitbart/NAACP/Obama Administration/USDA/probably-Journolist-but-who’s-keeping-track-at-this-point scandal, Shirley Sherrod, spoke to Media Matters’ Joe Strupp today about the experience of going from cable news villain to heroine in less than 24 hours, and unlike many in the media, Sherrod is not angered by the White House or the NAACP: She’s reserving her outrage for Breitbart and Fox News.

Of Breitbart, Sherrod claims she did not know who he was before the scandal broke, and that she was not contacted for comment before the highly-abridged version of her speech. “He never contacted me,” she explains. “I think they intended it to be what it ended up being, a racist thing that could unite even more the racist people out there who follow them.”

Throughout the interview, however, Sherrod comes back to Fox News’ role in her demise much more than Breitbart’s. Explaining her reason for canceling a scheduled appearance on America Live with Megyn Kelly, Sherrod claims that the network’s bias would have prevented them from taking her at her word had she given an interview:

“They have called me today and initially I had said yes (to an interview), but I thought about it and I did not think they intended to be fair in their reporting. They are going to say what they want to say regardless of what I say.” […]

“It was unbelievable. I am refusing to be on there. They have been calling me and calling me. I have refused to do an interview because they are biased,” she explained. “I don’t think Fox News does it fairly. It is worse so now. I have sat and listened to the way they cover the news even before this administration and I saw what was going on.”

She also accused Fox News of racism, telling Strupp that “they are after a bigger thing, they would love to take us back to… where black people were looking down, not looking white folks in the face, not being able to compete for a job out there and not be a whole person.”

And– surprise, surprise– she wants to sue, but isn’t sure who to attack legally yet: “I don’t know enough to know. I wish I did. I would love to sue. I am going to talk about it.” Sherrod has a lot to be angry about, and given the number of frivolous lawsuits filed in this country, she probably has legitimate ground to stand on against, at the very least, the USDA for using this video to fire her.

The most striking thing about this interview is how aggressively Sherrod takes on Fox News, so much so that it eclipses her rebukes of Breitbart, who originally ran the video. As Bret Baier argued yesterday, Fox News didn’t cover the story before her resignation (aside from a few comments in their primetime opinion hour). What’s more, the day after her resignation, Fox News’ opinion hosts covered the story in a light favorable to Sherrod and unfavorable to the NAACP and the White House.

The attacks on the network also feel off-color given the venue in which they’re presented: Media Matters, an institution primordially dedicated to discrediting Fox News. If we learned anything this month, it’s that websites with clear ideological biases sometimes make mountains out of molehills and hope no one notices when they backtrack. As Sherrod is entirely a victim of this type of political news coverage, it seems strange that she would be so eager to talk to Media Matters, and to talk almost exclusively about Fox News to them, and not nearly as much as Breitbart, the USDA, or the NAACP.