Six Must-Reads to Catch Up on the Syrian Conflict

Six Must-Reads to Catch Up on the Syria Conflict 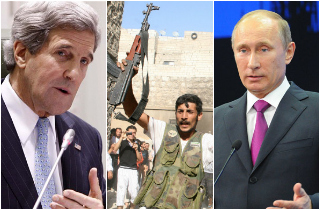 The multifaceted Syrian conflict is changing on a moment-by-moment basis. If you went to bed early last night, you might not even know that Vladimir Putin stuck his tongue out at the U.S. in the pages of the New York Times. (The White House blew a raspberry back at him.)

If you need to catch up fast, here’s a cheat sheet on the latest (as in last twelve-or-so hours) developments:

Secretary of State John Kerry is set to meet with his counterpart, Russian Foreign Minister Sergey Lavrov, to test the seriousness of the Russian proposal to place Bashar al-Assad’s chemical weapons under international control. Kerry and co. appear guardedly optimistic about the plan, as it keeps the U.S. from an unpopular military intervention. But they are also wary of trusting Putin, especially after Russia signalled it would not endorse a U.N. resolution that kept the use of force against Syria as an option.

Details of Russia’s proposal leaked ahead of the meeting. Telegraph summarizes:

Under the plans, Syria would first join the Organisation for the Prohibition of Chemical Weapons. Damascus would then make a declaration of its chemical weapons production and storage facilities, and a team of inspectors would be dispatched to the sites. Finally, agreement would be reached on how the weapons would be destroyed, Kommersant reported citing a Russian diplomatic source.

[…] The details released this morning include no timetable and make no mention of sanctions or other measures should Syria fail to comply – key demands laid out in rival US-French proposals on Wednesday and likely flash points at tonight’s talks between Mr Kerry and Mr Lavrov.

The U.N. inspection team that arrived in Damascus last month is finalizing its report, and says it has a “wealth” of evidence that the Syrian government used chemical weapons against its own people. However, as much of that evidence is circumstantial, the inspectors stopped short of actually accusing the regime. Via FP:

The inspection team, which is expected on Monday to present U.N. Secretary General Ban Ki-Moon with a highly anticipated report on a suspected Aug. 21 nerve agent attack in the suburbs of Damascus, will not directly accuse the Syrian regime of gassing its own people, according to three U.N.-based diplomats familiar with the investigation. But it will provide a strong circumstantial case — based on an examination of spent rocket casings, ammunition, and laboratory tests of soil, blood, and urine samples — that points strongly in the direction of Syrian government culpability.

As Assad still maintains he did not use chemical weapons, and any negotiated settlement of their surrender will likely proceed through the U.N., the strength of this team’s report is paramount to any diplomatic solution’s viability.

Months after the Obama administration said it would begin supplying arms to the Syrian rebels fighting Assad’s government, the flow of weapons and supplies has actually begun. The Washington Post reported that the CIA started shipments—”which are limited to light weapons and other munitions that can be tracked,” as well as “new types of nonlethal gear…including vehicles, sophisticated communications equipment and advanced combat medical kits”—between two and four weeks ago.

To many, this is too little, far too late. But officials said the delay was attributable both to the difficulty of delivering the resources in the midst of civil war, and worry over whether they’d end up in the hands of jihadi groups.

According to AP, General Salim Idriss, commander of the Free Syrian Army, claimed no such aid has arrived:

Top rebel commander Gen. Salim Idris told National Public Radio on Thursday that rebels had received no such aid from the U.S. The CIA declined to comment.

The officials said the aid has been arriving for more than a month, much of it delivered through a third party, which could explain why the rebel commander Idris does not believe the U.S. directly delivered the aid. The officials said the aid is delivered to commanders who have been vetted by the CIA, and the path of the weaponry is tracked through trusted parties within the country – though eventually, once they’re in the hands of fighters, the U.S. loses sight of where the weapons go.

Speaking of who gets what, MoJo’s Dana Liebelson does a deep-dive on the difficulty the U.S. has had with making sure that “millions of dollars in non-lethal aid” goes to rebel forces and not radical Islamic groups. The U.S. has authorized only one organization, the Syrian Support Group, to track the disbursements, and the SSG is relying mostly on receipts from rebel fighters to verify how the money’s spent. Worth a read, if only to comprehend how chaotic and complex even the smallest attempts at influencing the Syrian conflict can become.

4. How’d Putin Get an Op-Ed in the New York Times, Anyway? (BuzzFeed)

The Times of Israel cited rebel sources who say the Syrian Army has perpetrated another chemical attack:

The report was based on rebel sources, who said the attack took place in the Jobar neighborhood of the capital. The rebel sources said they could not tell what kind of chemical weaponry had been used, but that it was a poison gas of some kind, and was causing injuries, including breathing difficulties.

Footage posted to YouTube, and broadcast on Al Arabiya TV, showed a young man having trouble breathing, and receiving medical treatment. There were no immediate reports of fatalities.

Keep in mind, these are unconfirmed reports. But if the Syrian Army is going ahead with further use of chemical weapons, it would immediately and severely complicate the already tenuous diplomatic solution Kerry is attempting to hammer out.

Daily Beast’s Eli Lake reports that a handful of Americans have joined al Qaeda-linked affiliates fighting in Syria. Estimates vary from ten to sixty Americans travelling to Syria, but with significantly more European nationals also fighting with the groups, some worry Syria is becoming a “jihadi magnet.” Even worse from American intelligence perspective:

While the number of Americans who have traveled to join the jihad in Syria is low, some members of the U.S. intelligence community worry that fighters who receive training and battlefield experience in Syria could return to the West with skills honed by fighting in the country’s civil war.

“At some point all of these people from Europe are going home. All the folks there from all over the world, including the United States, will be coming home if they do not meet their end on the battlefield,” said Rep. Mike Rogers, the Republican chairman of the House Permanent Select Committee on Intelligence, on Tuesday.