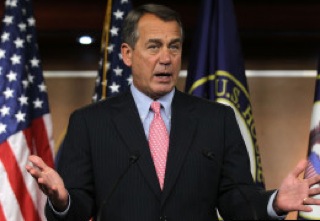 With friends like these, Mitt Romney has some work to do on the charisma front. At a fundraiser in West Virginia last week, House Speaker John Boehner told someone in a question and answer session that Americans were not likely to “fall in love” with Romney, and that no one would be voting for him (as opposed to against President Obama) aside from “some friends, relatives, and fellow Mormons.”

RELATED: Norah O’Donnell Hammers John Boehner: ‘When You Repeal [Obamacare], What Are You Going To Replace It With?’

The comments were a direct response to someone asking, “Can you make me love Mitt Romney?” He flatly answered “no,” adding that no one is likely to do that:

“No,” he answered, as first reported by Roll Call. “Listen, we’re just politicians. I wasn’t elected to play God. The American people probably aren’t going to fall in love with Mitt Romney.”

He added that the presumptive Republican nominee had “some friends, relatives, and fellow Mormons… some people that are going to vote for him,” but suggested that at the end of the day, Republicans would be voting against President Obama rather than for Romney.

“I’ll tell you this: 95 percent of the people that show up to vote in November are going to show up in that voting booth, and they are going to vote for or against Barack Obama,” Boehner said. “This election is going to be a referendum on the president’s failed economic policies. “

He did have something good to say about Romney: he’s a “solid guy.”

CBS asked for elaboration from Rep. Boehner’s spokesperson, who answered that President Obama “was greeted as a celebrity” when he won his election and that Romney “is the best candidate.” A Romney adviser agreed with the part about President Obama not being a good President, saying that “John [Boehner]’s right in that speeches and lofty rhetoric haven’t gotten the job done for the American people in the Obama era, and that Governor Romney’s dedicated focus on the economy can and will put the country back on track.”