State of Love and Trust: Two Big Reasons Why TV Reporters Are Loathed by the Public
column

State of Love and Trust: Two Big Reasons Why TV Reporters Are Loathed by the Public 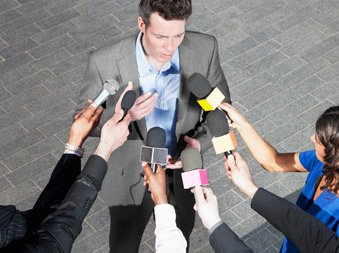 I’ve done it before. It’s an interesting, albeit somewhat disgusting, way to illustrate just how disenfranchised people are with gridlock in Washington…the new Ryan-Murray budget deal notwithstanding.

But what many in the TV reporter community don’t understand is how much Americans loathe us. “It just doesn’t make any sense,” we say to ourselves. “I mean…we’re on friggin’ TV. That means we’re charming, articulate, compelling, attractive creations of God (this is self-deprecation on my part, trust me). Many of us were likely in that Most Likely to Succeed category or perhaps a Prom King or Queen (yours truly won Class Comedian and somehow finished runner-up in the Best Party Host category…both awards weren’t exactly embraced by Mom and Dad Concha at the time).

We’d love to see proof of that!

And with that, here’s exhibit A:

A new Gallup poll shows that most Americans see TV reporters as dishonest and unethical. As in, like…80 percent of those polled.

So why is this, exactly?

Upon reflection for about 18 seconds, the answer is quite simple: Polarized media. Another survey—this one from Pew Research earlier in the year—shows that cable news is more opinionated than ever before. MSNBC stands at 85 percent opinion, for example, while Fox is 55 percent and CNN 46 percent. More opinion means lots of television personalities/hosts taking a side in a debate on hot topic A-through-G of the day. And when that’s the case—given an electorate that is basically split 50/50—it means gaining lots of enemies at home in a hurry, where more than a few proceed to voice their displeasure via social media.

Reporter accuracy is also being scrutinized more than ever, thanks to outlets like Mediaite. But we’re hardly alone. If you’re a conservative outlet like Fox, Media Matters’ primary existence is to scrutinize every word it says, every fact it shares. Their work in bringing down Lara Logan’s 60 Minutes Benghazi report only boosted its credentials (and likely, it’s funding) among its progressive base.

Conservative watchdogs like NewsBusters effectively put a microscope on all liberal outlets, who (in their view) basically consists of MSNBC/NBC, CNN, ABC, CBS, PBS, NPR, and just about every other acronym or three-letter outlet out there (Only Fox avoids the wrath). Jon Stewart and Stephen Colbert’s programs also mock the media—largely cable news—although 99 percent of Stewart’s material in this regard in recent months is directly only at Fox and CNN.

Either way, mistakes used to come and go in television reporting without barely being noticed or replayed. But all of the aforementioned watchdogs—along with YouTube—ensure that most errors will have the ability to be relived again and again on anything with a screen for eternity. Good times!

Another theory brings in a recent poll on Americans’ trust in each other in general. AP-GfK finds that only one-third of Americans say people can be trusted. Half felt that way in 1972.

So how can this be given all the different ways we can now communicate with each other? The old days of the 20th Century (up until about 1997, anyway) used to consist of using a home phone, snail mail or meeting in person. Now, of course, there’s cell phones (although make any call is becoming a foreign concept), texting, IM, email, Twitter, Facebook, Instagram, Snapchat, etc.

So if we can communicate more, why the lack of trust?

Because social media is somehow making us less social, that’s why…

Need proof? Go out to a hip restaurant in town this weekend. Look for those actually engaging in conversation versus those staring at their phones or typing. It’s downright astonishing. At home in your average family living room or apartment with roommates, it’s even worse. Less people are interested in actually talking directly to each other; typing is the preferred option. And when that happens, it makes trusting anyone—particularly with all the vitriol seen on social media like Twitter and comment sections in publications like this one—much more difficult when losing the ability to simply look a person in the eye.

Reporters and reports are dissected more than ever in the process…