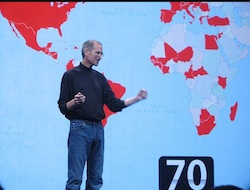 Apple CEO Steve Jobs – whose…er…job of late it seems is to keep his health issues private and out of public scrutiny – has finally opened up about his long battle with pancreatic cancer and other health problems. The impetus for the sharing? Jobs’ was coming out in support of Governor Arnold Schwarzenegger‘s bill to have California drivers decide when they get their license whether or not they’d donate their organs. Currently CA law has it that possible donors can attach the stickers themselves at their convenience.

“I was very fortunate,” the notoriously private Apple icon shared with an audience of doctors, transplant patients and media. A Tennessee donor was a match — and Jobs had a jet available to rush cross-country within the four-hour window needed for successful surgery. “Many others died waiting to receive one.”

While we applaud Jobs coming forward to support the governor’s bill, we wonder if his story wouldn’t better be used to talk about the real health care crisis facing America, not just the one facing California organ donor recipients (though that certainly plays a part). All those people that died on the waiting table because they weren’t Steve Jobs and didn’t have a private jet to usher them a new organ cross-country in the nick of time? That’s not just an issue of Jobs being “lucky,” that’s an argument for what’s wrong with health care today: those who have it and can afford treatment get to live, while many others have to take out second mortgages on their houses just to wait in the hospital hooked up to a dialysis machine, with no guarantee that their spot on the donor list will come up before their number does.