Ted Nugent on White House Trip: Someone Suggested We Flip the Bird at Hillary Portrait 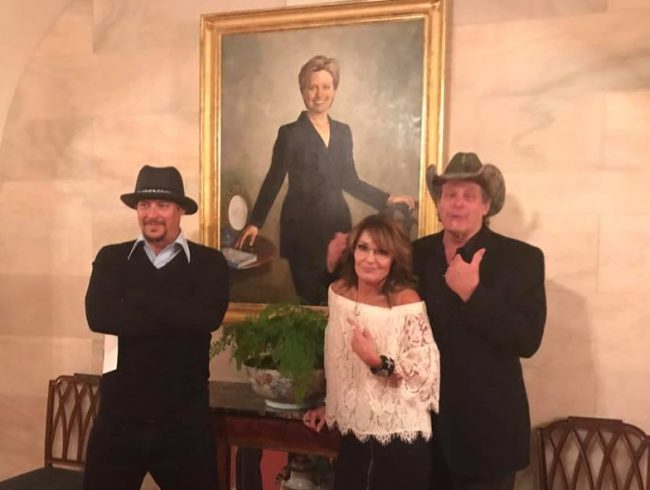 All appears normal in this photo above — which features Kid Rock, Sarah Palin, and Ted Nugent posing in front of Hillary Clinton‘s official White House portrait. But according to Nugent, the pose might have been quite a bit different if someone in the group had their way.

In an interview with The New York Times, Nugent said that someone in the group with whom he toured the White House on Wednesday night (including President Donald Trump) suggested they flip the bird at Clinton’s portrait. Nugent did not say which person had the idea.

“I politely declined,” Nugent said. “Let the juxtaposition speak for itself.”

Nugent — who was invited to tag along by Palin (because “Jesus was booked,” Palin told CNN) — seemed to be impressed with Trump’s knowledge of his new digs.

“He gave us a wonderful personal tour of every room and talked about the origins of every carpet and every painting — there was a Monet — and then we had dinner,” Nugent said.

Nugent told The Times that the group was there for four hours.