The Media vs. Trump: Cutting Through the Rhetoric
Opinion

The Media vs. Trump: Cutting Through the Rhetoric 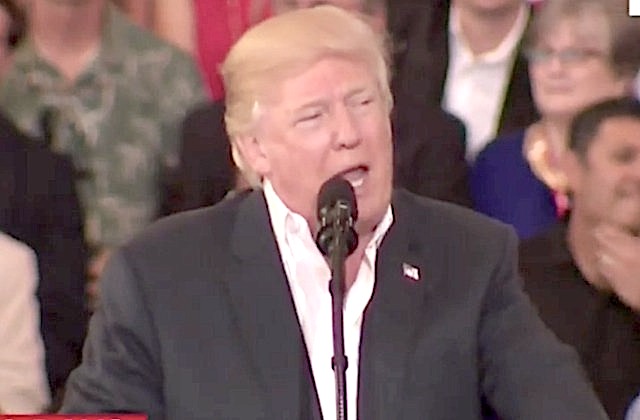 It’s no secret that the relationship between President Donald Trump and the mainstream media is hostile, combative, and intensely frigid — and there’s no sign that the troubling dysfunction is going to improve anytime soon.

In recent months, Trump has infamously called the media — and mainstream outlets, in particular — “fake news” and “very fake news,” has pledged not to attend this year’s White House Correspondents Dinner, and recently blocked some outlets’ access to a press briefing.

But that only scratches the surface, as the president’s most sweeping anti-media narrative was his contentious claim in a recent tweet that the mainstream press are the “enemy of the American people” — language typically reserved for the nation’s most diabolical enemies.

It was that message, sent loud and clear, that sparked a resounding gasp in U.S. newsrooms, and ignited a plethora of speculation and consternation. Had the leader of the free world just dubbed one of the First Amendment’s main benefactors foes of the American people?

Journalists instantly hit back at Trump, with veteran news anchor Dan Rather calling his remark “outrageous” and a “deep betrayal of our national history.” Other reporters took to social media with the #NotTheEnemy hashtag to praise the bravery of wartime journalists who have sacrificed greatly to bring news to the masses.

What has since developed is a stalemate of sorts, with both the Trump administration and the media digging in their heels. But as the media find themselves simultaneously horrified and emboldened, an uncomfortable question lingers: Underneath all of the muck and inflated rhetoric, did Trump make a valid point?

Without a doubt, Trump’s over-simplistic, over-the-top rhetoric about “fake news” and the media being the “enemy” is utterly unhelpful, and it fails to adequately address the real and pervasive problem with America’s mainstream media: The fact that, for decades, ignorance, liberal bias, and progressive privilege have dominated newsrooms.

And little has been done to adequately address this paradigm. Don’t believe me? Consider that the public neither trust nor have respect for the press (a problem that is anything but new and has, in fact, only worsened in recent years).

As I extensively cover in my new book, Fault Line: How a Seismic Shift in Culture Is Threatening Free Speech and Shaping the Next Generation, conservatives and Christians, alike, have complained for eons about biases in media, but their calls have generally gone unheeded.

Unfortunately, the media’s most recent spat with the president is only likely to cause journalists to double down, assuming the president’s attack is baseless and unwarranted. That said, there’s an essential and direct message every journalist must comprehend: The press isn’t the victim, and many journalists should, in fact, take responsibility for creating the very climate and environment that has made Trump’s anti-media claims resonate with so many Americans.

While certainly not the “enemy of the American people,” the press have collectively operated with an intense slant, failing at many moments to represent conservatives and Christians, alike. This has left scores of Americans feeling misrepresented, overlooked, and manipulated, regardless of whether this was the media’s intent. Without a doubt, many people in these cohorts have become a captive audience for Trump’s anti-media claims.

But this all started well before Trump came on the scene, as people have long distrusted the media. Just consider a June 2016 Gallup poll that found that only 8 percent of Americans had “a great deal” of confidence in newspapers; the same proportion was found for TV news.

The only American institutions that fared worse were big businesses and Congress — and that’s saying something, no?

Overall, Gallup found that just 32 percent of the public have a “great deal” or “fair” amount of trust in mass media; that proportion was at 55 percent in 1999. And just 23 percent of Americans said in a 2016 Newseum Institute poll that they “believe that the news media attempts to report on news without bias,” compared to 74 percent who disagreed.

And, just for clarity’s sake, it must be noted that Americans are much more likely to believe the news media are “too liberal” (44 percent) than they are to say “too conservative” (19 percent).

If you’re looking for other clues to highlight just how bad the situation is for American media, look no further than a recent Fox News poll, which asked Americans who they trust more: the media or the Trump administration. In the end, 45 percent said they trust the administration to “tell the truth,” while 42 percent who said the same for reporters covering the White House.

But don’t just take my word for it, as Gallup concluded in a 2015 report: “Since 2007, the majority of Americans have had little or no trust in the mass media.” Thus, Trump didn’t invent the idea that the media hold a deep bias — and many journalists’ reactions to his candidacy and election victory have unfortunately played right into his hand.

While the media absolutely must defend their First Amendment right to cover the Trump administration and should surely remain committed to that cause, journalists also need to explore the progressive privilege that has reigned in their industry, and should strive to better understand conservative culture if they wish to equal the informational playing field.

As I note extensively in Fault Line, a similar bias plagues universities and Hollywood, forming a triangular dominance that it tragically shaping our culture; it’s a collective bias that has profound ramifications for free speech in America, and it’s far past time we turn back that tide.

Every voice deserves equal and fair representation, and it’s my hope the media, among other sectors, will take the lessons learned this past year and put them into practice.

— —
Billy Hallowell, author of “Fault Line,” has worked as a journalist and commentator for over a decade, contributing to The Washington Post, Human Events, The Daily Caller, Mediate, The Huffington Post, and appearing on Fox News, FoxNews.com LIVE, and HuffPost Live, among others. He’s the former faith and culture editor of TheBlaze and the current senior editor of Faithwire. To learn more about Hallowell follow him on Twitter @BillyHallowell or visit his website: www.hallowellfaultlinebook.com.
— —