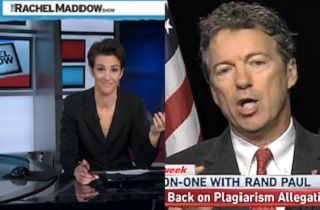 Without actually naming the MSNBC host who’s been all over his plagiarism like a Confederate flag over a Tea Party protest, Sen. Rand Paul expressed a wish to “duel” Rachel Maddow, or anyone else who dares to infer dishonesty from his habit of lifting from others in his speeches, on Sunday morning’s This Week. In an interview with host George Stephanopoulos, Paul explained why he would forego pistols at dawn with Rachel and company.

In trying to chalk his burgeoning plagiarism scandal to overactive “footnote police” (here’s a footnote to high-schoolers working on term papers: footnotes do not actually allow you to lift other people’s work verbatim), Paul told Stephanopoulos “I take it as an insult, and I will not lie down and say people can call me dishonest, misleading or misrepresenting. I have never intentionally done so. And like I say, if, you know, if dueling were legal in Kentucky, if they keep it up, you know, it would be a duel challenge.”

Of course, Paul wouldn’t challenge anyone to a duel, because that would be insane, or immoral, or insane and immoral, right?  Wrong. The reason Rand Paul gave for not wanting to race Rachel Maddow to see who could shoot whom in the face first was that “I can’t do that, because I can’t hold office in Kentucky then.”

As jokes about firearms homicides go, it was pretty funny, but those unfamiliar with Kentucky politics might not have fully understood the punchline. It’s not just that shooting another human being to death wouldn’t “play well” in the Bluegrass State, it’s that in order to hold public office in the state, officeholders must swear an oath that they have never participated in a duel:

Members of the General Assembly and all officers, before they enter upon the execution of the duties of their respective offices, and all members of the bar, before they enter upon the practice of their profession, shall take the following oath or affirmation: I do solemnly swear (or affirm, as the case may be) that I will support the Constitution of the United States and the Constitution of this Commonwealth, and be faithful and true to the Commonwealth of Kentucky so long as I continue a citizen thereof, and that I will faithfully execute, to the best of my ability, the office of …. according to law; and I do further solemnly swear (or affirm) that since the adoption of the present Constitution, I, being a citizen of this State, have not fought a duel with deadly weapons within this State nor out of it, nor have I sent or accepted a challenge to fight a duel with deadly weapons, nor have I acted as second in carrying a challenge, nor aided or assisted any person thus offending, so help me God.

While Kentuckians have tried, from time to time, to have that provision removed from the state’s constitution, it’s still there, so if Rand Paul ever wants to hold statewide office, he’ll have to hold fire for now. Maybe it’s for the best, though, because Maddow is apparently not such a shabby shot.