The Media Prepares To Saturate With “Obama is Overexposed” Meme

The Media Prepares To Saturate With “Obama is Overexposed” Meme 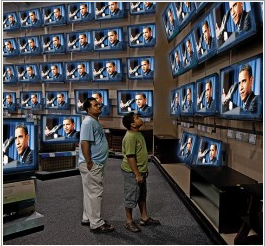 President Obama starts his marathon round of interviews today ahead of Sunday’s “el Completo” when he will appear on five networks (but not Fox). On Monday he does Letterman. On Wednesday he addresses the UN. All of this follows last week’s joint session address, and this week’s ‘jackass’ remark. So perhaps it shouldn’t come as a total surprise that it appears the press is about to dust off and cart out the “Obama media saturation” meme.

Granted Obama is doing a lot of television, but he’s been doing a lot of it all along and it’s not like the President has suddenly launched a tumblr! (Though I do think he should reconsider the chalkboard this weekend. Also, Office Hours!) However here are some early warning signs that if the President does not succeed in selling this health care bill, or at least appear to divert the debate even a little bit, next week’s conversation, and at least the cover of one weekly, is going to be all about how too much Obama has diluted Obama’s power.