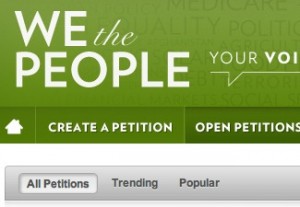 While we were all slogging through April Fool’s Day, the White House responded last Friday to a petition demanding Donald Trump be arrested.

The petition was posted on the White House website last month arguing there is legal ground to arrest Trump for “inciting violent acts amongst his supporters.” While it acknowledges the government cannot punish “inflammatory” remarks, they can if it’s “directed to inciting, and is likely to incite, imminent lawless action.”

Here’s how the White House responded:

Thank you for signing this We the People petition.

We encourage you to use the We the People platform to petition the Administration to take action on the policy issues you care about. If a petition gets enough support, White House staff will review it, ensure that it’s sent to the appropriate policy experts for their review, and issue an official response.

Thanks again,
— The We the People Team

If you’re surprised by the non-answer, don’t be.

The British government had to take up a petition demanding Trump be banned from the country, but that’s likely not to actually happen.