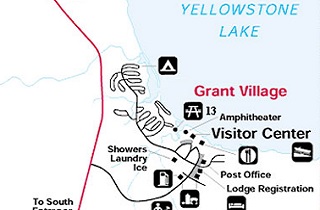 Who says Congress can’t get anything done on gun regulation? A 2010 law permitting the possession of firearms in national parks has resulted in the first fatal shooting at Yellowstone National Park since 1978, and the first fatal shooting of a child in the park since 1938. On Saturday morning, park rangers responded to a report of a 3 year-old girl who had shot herself in the head, reportedly with her father’s handgun. Emergency medical personnel were unable to revive her.

Little information was released by authorities about the toddler’s death since her mother called emergency dispatchers on Saturday to report that her daughter had shot herself at the Grant Village campground on the shores of Yellowstone Lake.

Emergency personnel were unable to resuscitate the child, whose name was being withheld until Monday at the request of the family, who are from Idaho, park spokesman Al Nash said.

The death comes three years after enactment of a federal law that lifted a decades-old ban on the possession of firearms by visitors to most national parks, including Yellowstone.

It marks the first fatal shooting in Yellowstone since 1978, and the first shooting death of a child in the park since 1938, when the 13-year-old son of the park’s master mechanic accidentally shot himself in the head with a rifle, Nash said.

The law that enabled that handgun to be carried into Yellowstone was passed in 2009, as an amendment to the Credit CARD Act. The amendment was sponsored by Sen. Tom Coburn, and passed in the Senate by a vote of 67-29, including 27 Democratic “yes” votes. There were no Republicans who voted against the amendment. The bill was signed into law by President Obama, and took effect in 2010. It states:

In fact, the national parks rule was one of only two major pieces of gun legislation passed in President Obama’s first term, the other being a law that allowed guns in checked bags on Amtrak trains. Although the President has pushed for a variety of gun regulations in the wake of the tragic mass shooting in Newtown, Connecticut in December, none have passed Congress. The day President Obama was to sign the Credit CARD Act into law, then-White House Correspondent Helen Thomas asked White House Press Secretary Robert Gibbs about the Coburn provision:

MR. GIBBS: Look, obviously that is a piece of legislation that we’re going to sign today and think it’s — whether or not Congress — whether or not the — I mean, obviously it’s not related to the credit card reforms, and I don’t know individually how the President views the legislation, but thinks overall the credit card reform bill is important for consumers and should be signed.