Trump’s Relentless Smear Campaign Against Joe Scarborough Unpopular on The Right, Too 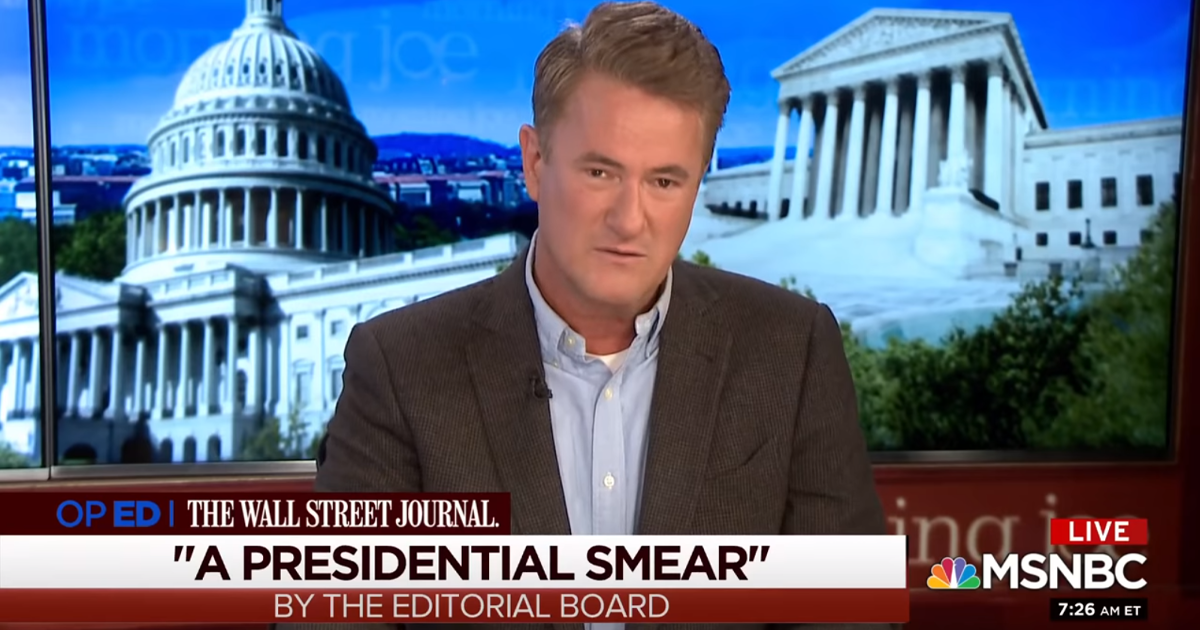 President Donald Trump has continued today his series of attacks on Joe Scarborough, invoking the tragic death of a former staffer to smear the MSNBC host despite a heartfelt plea from the victim’s loved ones and increasing pressure on Twitter from Democrats and the press, including Mika Brzezinski.

But it is not only from the left.

CNN’s Jake Tapper tweeted on Tuesday that though “many in the GOP power structure and pro-Trump media who have lost loved ones in unspeakable ways” and that they “would be gutted” if a sitting president exploited that tragedy, they are sitting “silently” in the face of this onslaught.

There may be “many” who sit silently, but there also more public objections this time than has become the norm. What is rare is the President finding virtually no support from his own side, or at least no meaningful support. Whether silent on the topic or outright outraged, in general the right has left him standing by himself this time.

Here are some examples from the right, and/or right-leaning mainstream media outlets.

It’s unworthy of a partisan blogger, let alone the president of the United States.

A Presidential Smear | Wall Street Journal | The Editorial Board

Mr. Trump is debasing his office, and he’s hurting the country in doing so.

There is a difference, though, between mocking someone’s ratings and hurting an innocent family with the memories of their tragic daughter because of a petty feud.

Whatever his issues with Scarborough, President Trump’s crazed Twitter rant on this subject was vile and unworthy of his office. … To say Trump owes Scarborough an apology is to put it mildly. But in the end, Scarborough won’t be the one hurt by this.

The Daily Wire’s Ben Shapiro called Trump’s tweets “an onion of moral and intellectual imbecility.” Conservative website The Resurgent wrote that Trump’s comments are “indefensible.” Resurgent founder and editor Erick Erickson said that it’s “sad and pathetic that the President would resurrect a leftwing conspiracy and embrace it.”

National Review’s Charles Cooke, commenting on declining Trump poll numbers, said “It’s almost as if behaving absolutely reprehensibly in the middle of a serious crisis is unappealing” in a recent tweet, and Newsbusters managing editor Curtis Houck said “Trump should shut the hell up” about it. Media Research Center’s Scott Whitlock adds:

Remember when we had Republican presidents who were able to do their job without falsely accusing people of being a murderer? Those were the days. But I guess they’re gone now.

Among Trump’s politician allies, too, there is dissent. Rep. Liz Cheney called on him to stop “causing pain.” And Illinois Republican Rep. Adam Kinzinger, likewise pleaded for Trump to “just stop.”

Nevertheless, there are some outlets have taken the old path even on this subject. Trump super-fan site The Federalist, for example, ran an editorial calling Trump’s tweets “indefensible” before 19 or so paragraphs essentially defending them.

“[N]one of this is being explained to excuse Trump’s tweets cruelly exploiting the memory and reputation of an innocent young woman to go after a disingenuous cable news host,” wrote Mark Hemingway. He added that Trump “merely exposed existing contradictions,” referring to double standards and the use of “virtue” to run “roughshod” over the victimized MAGA base.

House majority leader Rep. Kevin McCarthy pretended not to know anything about it, thus dodging the need to comment.

Radio and Fox News host Mark Levin, who normally spends a great deal of time talking about Joe Scarborough, has gone mostly silent. Except to say, without citing the particular issue by name, that ‘If Twitter censors those promoting conspiracy theories, I assume it’ll censor every so-called journalist and newsroom that promoted the Russian collusion conspiracy for years and years.”

And that, of course, brings up the Fox News network itself. Mediaite editor-in-chief Aidan McLaughlin pointed out on Twitter on Wednesday that Fox has “mostly ignored” Trump’s still very much ongoing attack.

Most conservative media has condemned this, but (remarkably?) Fox News has mostly ignored it. The president has repeatedly and falsely accused a prominent TV host of murder and it wasn’t mentioned in primetime last night or on Fox & Friends this morning

The topic didn’t come up during Fox’s primetime opinion shows. In fact, the biggest mention was a brief segment on Special Report. And though the attack was a dominant topic at yesterday’s briefing, host Dana Perino barely mentioned it, despite the briefing ending during her show. She did, however, talk about it more in today’s airing of The Daily Briefing while interviewing Trump Campaign Communications Director Tim Murtagh, asking whether it gives him “any pause” that the widower says Trump is “soiling” the memory of his loved one.

Still, silence isn’t praise, and the dearth of outlets actively praising Trump’s illogical and cruel assault is definitely noteworthy. Perhaps, as The First TV’s Jason Howerton said, there is a line after all.