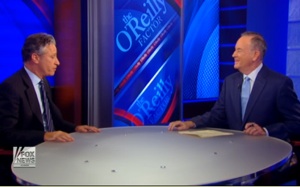 Did you think that the conversation between Jon Stewart and Bill O’Reilly lacked “zazz”? For all the expectation of two of the heavyweights of opinion media world — ostensibly presenting differing ideological points of view — the jovial exchange lacked any real body blows to declare a “winner.” Well, thanks to the folks at Fox News, the entire unedited version of the interview is available, and it turns out that much of the un-aired portion includedthe most pointed commentary by Mr. Stewart, which we’ve summed up below.

The edited version that aired on last night’s program, came out to just under 12 minutes of actual interview time (interrupted by a commercial break.) The unedited interview (embedded below in two parts) rounded up to over 19 minutes.

So what was cut out? Some of the most interesting parts to the interview, namely Stewart’s mocking of O’Reilly’s “folksiness” and blue collar perspective. More importantly, a fascinating back and forth over the Tea Party movement that Factor producers decided to leave on the cutting room floor.

It started with Stewart telling his host that “the tea party scares you as much as it scares anybody,” which had O’Reilly explaining his familiarity with Tea Partiers: “Beck and I go out on the Bold Fresh tour and we see these people all the time. They would stone you to death like the Iranians do.” Stewart jokingly replied, “Are you suggesting that regular people in this country are the Taliban? Did you just say on your own show that regular Tea Party Americans are the Taliban?”

Regarding the Bold Fresh tour, Stewart chided O’Reilly and fellow host Glenn Beck, “no I know that you and Glenn see green, I mean, see the people,” to which O’Reilly laughed “I know.” Stewart then followed up by questioning the motives of the tour that O’Reilly performs with his Fox News cohort “where do you set up the merchandising table at those.” O’Reilly quickly retorted “I give it all to charity,” then chided his guest “you should try it some time.” (Note – Stewart is known to be quite generous in both his time and finances but does not promote that fact as much as his peers.)

But perhaps the most fascinating part was Stewart’s summation of the Tea Party movement, particularly in light of the so-called “GOP Civil War” when Fox News analyst Karl Rove candidly called out Tea Party candidate Christine O’Donnell for not being as electable as her primary foe Mike Castle.

Stewart said “here’s the truth about the Tea Party. Karl Rove and a lot of the Republican establishment thought they could ride that bull, they could ride that intensity and that energy of religious conservatives and all of the people that really believe all of those things that Karl Rove and those guys promised them but never going to deliver on. But now the tables have turned, and he’s just another schmuck wearing a red bandanna, running down the streets of Pamplona and the bulls are chasing him.” O’Reilly flatly replied, “Well the Tea Party people, you should admire their independence.” With stunned look, Stewart followed up “are you even listening to me?”

As O’Reilly segued to Stewart’s “Rally To Restore Sanity” planned for October 30th, he jokingly called it a “Halloween” event and asked if he needed to come in a costume. Stewart immediately called back his previous critique of O’Reilly, saying, “no, you can come dressed as a guy still pretending to be blue collar,” which led to a reminder that the Harvard educated O’Reilly is more of a cultural elite than he may let on to.

There are a number of other topics that were left on the edit floor – perhaps most notably is O’Reilly’s predictable salvo that Stewart’s audience is made of of stoned slackers, according to a Rasmussen poll. Given the weight that Stewart and O’Reilly bring to the national discourse, the interview in full unedited glory, is definitely worth a look.