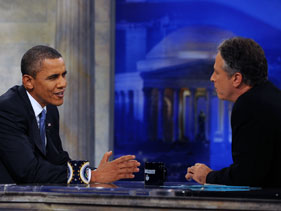 Last night President Barack Obama sat down for a full 22 minute interview with Daily Show host Jon Stewart, and judging by the reaction in today’s news, the interview was, by turns, flat and wonky. The implication is that President Obama has lost his “rock star” aura, a sharp and profitable metaphor heading into the midterm elections. However, isn’t wonky and even-measured what we should be lauding right now? Do we really want a leader that can make with the comedy jokes?

While the video of morning news programs is not yet available, there seemed to be consistent narrative across many of the morning news shows: that President Obama was sorta dull, and that Jon Stewart is/was the star of the interview. Fox & Friends predictably called it “not very funny because he got a little wonkish defending his record.” Morning Joe‘s Joe Scarborough felt “there were a couple moments, but the moments were Jon Stewart’s moments.”

While it’s true that the President was less funny than Stewart, these critiques fail to mention that Stewart is a battle-tested comedian who’s at the top of the entertainment game. While Obama may be seen by some as a “great communicator” (or not so much by others), his role in this format is to stick to his political guns, even at the risk of being boring.

Some criticism of the President goes beyond simply not being entertaining to say that the appearance is indicative of ubiquity. Case in point: Josh Greenman at the NY Daily News though the whole enterprise was “dumb.” In a post titled “Barack Obama’s dumb ‘Daily Show’ Jon Stewart appearance and the President’s diminishing brand,” Greenman posits that last night was further evidence of Obama’s over-saturation, somehow blaming the President and not that media nor consumer who want the 24/7 coverage.

Obama’s handlers were supposed to be smarter than this. They were supposed to use his celebrity strategically to advance his agenda. Instead, they’ve been indiscriminate, carpet-bombing Americans with the man they elected rather than launching communications smart weapons.

To be fair, not all of the reviews were negative or tough on the President. For example, NPR’s JJ Sutherland was surprised at how relaxed the interview was, but credited Mr. Stewart’s growing influence over the President’s cool demeanor:

What was perhaps the most surprising part of President Obama’s appearance on The Daily Show with Jon Stewart last night, was how comfortable it all seemed. The interview was fairly standard, polite, a couple of jokes. Obama seemed more relaxed than Stewart at times, but there was no sense of anyone being that surprised that a President would appear on a comedy show. It’s a tribute to how our times have changed, and a tribute to the growing influence on Mr. Stewart himself.

Bottom line is that Obama’s appearance on The Daily Show failed to meet the hype, but that is more the fault of false expectations than it is of the appearance. (Perhaps, not unlike the Obama presidency to date?)

The media was rightly criticized for presenting Obama with idolatry and messianic tones two years ago, but it appears that the pendulum has swung too far the other way in correction. The president should not be a rock star, entertainer, nor comedian, and so he should not be criticized when he fails to deliver entertaining content. Leading the country with effective public policy is his job, and he clearly has his hands full with that.