Was This Another Morning Joe Swipe at ‘Needy and Sad’ Chris Cuomo of CNN Today?
video

Was This Another Morning Joe Swipe at ‘Needy and Sad’ Chris Cuomo of CNN Today?

By now it’s almost becoming a daily exercise to track all of the biting criticisms that MSNBC’s Morning Joe duo has had for their CNN New Day rival Chris Cuomo.

Just one day after Joe Scarborough took only thirty seconds into his broadcast to take an impromptu swipe at Cuomo’s ego, it would seem as if the MSNBC host did it again on Thursday in much more subtle terms.

But on Thursday morning, Scarborough came back from commercial by asking his cohost Mika Brzezinski the following: “What do you think about when — let’s say you have a TV show — and you Retweet people saying that you’re handsome. And attacking somebody who’s on the other [network]. ‘He’s handsome.’ Would you retweet that?”

“No, I would think that would be very weird,” replied Brzezinski. “Actually the word would be ‘needy.'”

But who was Scarborough talking about? Immediately we searched through the Twitter feed of Chris Cuomo, assuming he was the target of the latest Scarborough barb. Nothing turned up.

But we then figured out that Cuomo has favorited the following Tweet from yesterday: 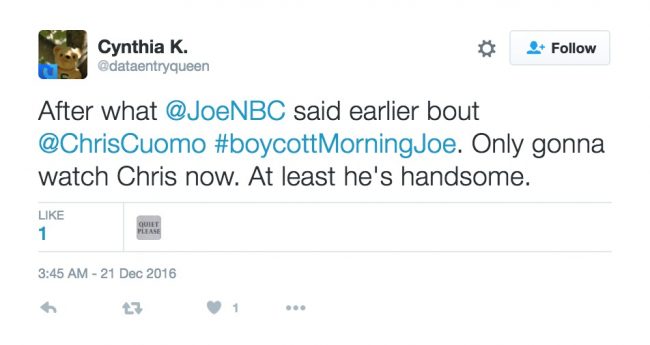 See that one “Like”? That’s Cuomo’s Twitter account; it’s impossible to know if at some point Cuomo had actually retweeted the message — which touts, “Only gonna watch Chris now. At least he’s handsome” before undoing the retweet. But it’s as close as anything to what Scarborough alleged Thursday morning; if so, it would be just the latest example of the ongoing feud between CNN and MSNBC.

Earlier this Fall, Cuomo called out the Morning Joe duo as being “boosters” for Donald Trump‘s candidacy; he also once retweeted a user who identified the MSNBC morning show as “racist propaganda TV.” And several weeks ago, Brzezinski’s visit to Trump Tower spurred the confrontational nature of the two networks even more, the latest in a long line of back-and-forths between the two sparring factions.

Need further evidence that Scarborough was likely swiping at the New Day anchor? He immediately followed up his above commentary with this sly sentence: “Makes me sad this Christmas season that there are so many needy, sad people.”

…Emphasis on the “Chris” in “Christmas.” Watch above via MSNBC and judge for yourself.
—
[image via screengrab]