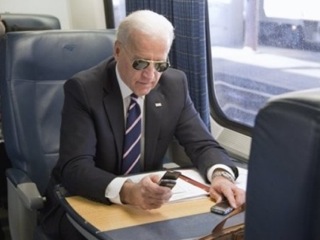 For many famous people, Twitter has become a way to interact directly with the people who follow their careers– a quick way to eliminate the stranglehold many middle men and public relations teams keep over them. Which is exactly why, at first glance, the decision to create an account for Vice President Joe Biden seemed like such a bizarre one, yet here we are: Vice President Biden’s office will be engaging with the Twittersphere @VP, starting today.

For those expecting the Vice President to live up to his reputation of being an unstoppable gaffe machine, there is a bit of bad news. According to ABC News, the account is specifically for the Office of the Vice President, and most of the tweets will come from staffers, or his wife, Dr. Jill Biden. It will serve to keep the public updated on what the Vice President and his wife are working on, the office explained, and there are plans for it to follow certain accounts (no word on who yet, but we can imagine the President, @BarackObama, will be one of the lucky ones). Their first tweet was a quick welcome from the Bidens, asking people to follow and expect more in the near future.

As the handle is @VP and not directly linked to Vice President Biden particularly, it does nothing to put away rumors that President Obama is considering a change in his second-in-command for 2012. Given how populated Twitter is, there may be good reason for the handle, as Wired reports:

And then there is the matter of choosing the “@VP” handle. True, the two best alternatives were taken. The well-known shorthand reference to the vice president of the United States is “Veep” — but @Veep is a woman in Paris who has 41 followers and whose Tweets are protected. @VPBiden is a woman in North Dakota whose Twitter bio stresses that she is “…NOT JOE BIDEN! (emphasis her own). Even more curious: @VPBiden has exactly one follower and has Tweeted a mere 20 times — all of them just two days ago, on July 3, 2011. Hmmmm …