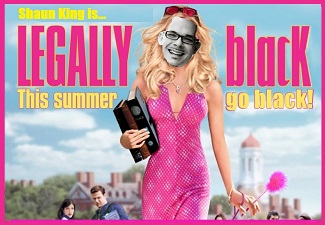 What is a brother to do? #BlackLivesMatter activist Shaun King is under heavy investigation by the CIA (Conservative Internet A-holes), who have been turning his life inside out trying to prove that King is not, in fact, biracial, and is, in fact, white. Their evidence consists of some internet sleuthing about King’s birth certificate, which lists an apparent white man as his father, and an old picture in which King “appears much more obviously Caucasian, with curly red hair,” because who ever heard of a mixed-race person with red hair?

Also at issue is King’s tale of a racially-motivated beating when he was in high school, which a rural Kentucky police report failed to corroborate, and why would they lie about that, especially to discredit an anti-police brutality activist? Sure, King has produced at least three witnesses who corroborate elements of his story, including a teacher, but why would any of them tell the truth? Teachers and students are famed for their unbreakable wall of silence.

Since the Shaun King whiteness allegations broke, I’ve been contacted by multiple friends, white and black, right and left, wanting to know my gut feeling on this. Unfortunately, my Negrodar™ is on the fritz just now, so I can only be of limited assistance. Some folks who might otherwise be on Shaun’s side are a little bit puzzled by the coy, vague language in his Twitter rebuttal, namely that all of his longtime IRL friends have always “known me as black or bi-racial.”

But King also explains that “Out of LOVE for my family, I’ve never gone public with my racial story because it’s hurtful, scandalous, and it’s MY STORY.” Without getting into too much speculation, it should be easy to see why King might want to keep private the reason why maybe his mother might give her white husband’s name to put on a birth certificate, even if another man was the father. Unfortunately, it leaves him without the requisite proof of blackness.

Others point to King’s appearance, and a certain kind of vibe they get off of him. I can see what they mean, Shaun King looks almost as white as this guy:

Now that you mention it, maybe Chris Hayes is trying to “pass.”

This is so confusing. How are white people supposed to know if Shaun King is really one of us? The race-traitors at The Daily Caller and Breitbart.com would simply have us rely on half-baked evidence like birth certificates (which are easily faked) and the dude’s physical appearance., but conferring whiteness is serious business. You have to be sure.

Then, along came CNN’s Don Lemon with the answer to all of our problems. While reporting that an unidentified “family member” also claims Shaun King is white, Lemon revealed that he asked Shaun King whether or not he is “legally black”:

As it turns out, there is crystal-clear legal precedent for Lemon’s “legally black” standard (although the technical term at the time was “colored”). The Virginia Racial Integrity Act of 1924 laid out the problem of the ten-to-twenty-thousand “near white people” who still had enough “colored blood” in them to “prevent them from being white,” and the solution:

In the past it has been possible for these people to declare themselves as white, or even to have the Court so declare them. Then they have demanded the admittance of their children in the white schools, and in not a few cases have intermarried with white people. In many counties they exist as distinct colonies holding themselves aloof from Negroes, but not being admitted by the white people as of their race. In any large gathering or school of colored people, especially in the cities, many will be observed who are scarcely distinguishable as colored. These persons, however, are not white in reality, nor by the new definition of this law, that a white person is one with no trace of the blood of another race, except that a person with one-sixteenth of the American Indian, if there is no other race mixture, may be classed as white.

Lemon’s suggestion is a game-changer, because the courts in 1924 Virginia didn’t have DNA to go by, only good instincts and easily-manipulated records. But by that law’s standard, it’d be pretty difficult for anyone to obtain “legal” whiteness. Now that Lemon mentions it, don’t Tucker Carlson and Glenn Beck have a little too much wave in their hair for comfort? Maybe we ought to be checking their legal whiteness before we take anything their websites have to say about Shaun King for granted. We’ve established that Shaun King is at least white enough to get into the Sons of Anarchy, but as a legal matter, he might as well be Bobby Seale. For all we know, Shaun King, Glenn Beck, and Tucker Carlson are all swimming with “colored” blood.

Hold on a minute, I forgot why we’re testing the racial purity of Shaun King, but not Tucker Carlson or Glenn Beck. Help me out here. Is it because Shaun King thinks #BlackLivesMatter, and those other guys don’t? I refuse to believe that.

As for Don Lemon’s question, I have no way to know for sure, but I’d bet money that none of them are “legally white,” and I’ll leave it up to them to decide what that does make them.