WH Transparency Is Promising, But Still Not What We Were Promised 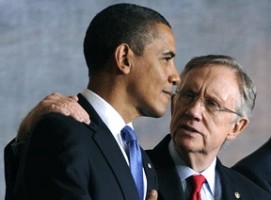 Although most news operations seem more concerned with transparency as it relates to our clothing at airport scanners these days, the White House is taking fire anew over the President’s campaign pledge to strip-search healthcare negotiations in full view of the public. There may be good, reasonable answers to these questions, but what the White House gave us yesterday isn’t it.

Press Secretary Robert Gibbs was pressed on the issue of Health Care transparency yesterday, spurred by a letter from C-SPAN which requested access to the upcoming process of reconciling the House and Senate bills. Here’s some of what Gibbs had to say:

Q Well, you didn’t, because you said —

MR. GIBBS: I said I hadn’t seen the letter, which I haven’t —

Q Why do you need to see a letter? I mean, this is something the President said during the campaign and he talked about he wants everything open on C-SPAN —

MR. GIBBS: Dan asked me about the letter and I haven’t read the letter.

Q Well, I’ll just ask you about having it on C-SPAN —

MR. GIBBS: I answered Dan’s question and I answered this before we left for the break, Keith. The President’s number-one priority is getting the differences worked out, getting a bill to the House and the Senate. We’ve filled your newspaper and many others with the back-and-forth and the details of what’s in these bills. I don’t want to keep that from continuing to happen. I don’t think there’s anybody that would say that we haven’t had a thorough, robust, now spanning two calendar years’ debate on health care.

Q There are a lot of reasons not to do it on C-SPAN — people could showboat. Does he regret making that statement during the campaign?

This isn’t the first time this has come up, and Gibbs’ responses are pretty consistent. This White House, as even consummate skeptic Jake Tapper points out, has an excellent record of transparency relative to past administrations. This has been the White House’s drumbeat, that the Obama administration has been more transparent than any in our history. The release of the White House visitor logs and the almost real-time reporting of Recovery Act data are good examples of this, as well as some of the problems that can accompany this kind of openness.

Even on Health Care, the promise of openness has been partially fulfilled. Gibbs is quite correct that there has been an unprecedented level of public involvement in the debate. An extensive healthcare summit at the beginning of this process was a model of what the President had promised, engaging a wide variety of stakeholders in full view of C-Span’s cameras. Along the way, there has been copious coverage of various debates and votes in Congress.

But Gibbs’ responses yesterday failed to address the most important part of that pledge, the one that has gone unfulfilled. Secret negotiations like the one between the pharmaceutical lobby, the White House, and the Senate Finance Committee are the Obama pledge’s raison d’etre. Hours of debate and information are nice, but the real value of transparency is in keeping everyone honest. By meeting with insurance and pharmaceutical industry leaders in private, the administration has shielded the parties most in need of being kept honest, the ones most likely to poison the process.

In fact, the President even referenced the pharmaceutical lobby specifically when explaining the benefits of an open process:

If there had been television cameras at those negotiations with PhRMA, would that deal have ever been struck? Probably not, and that might be the tough answer that’s being left unsaid. If the administration felt that removing the pharmaceutical lobby as an obstacle was crucial to getting reform done, so much so that it outweighed their pledge for transparency, that would be an ugly truth, but a truth nonetheless.

We were promised transparency filet mignon to replace the bread and water of  previous administrations, and we’ve ended up with Domino’s Pizza. Granted, it’s the new and improved Domino’s, but still. The White House owes the American people a better explanation of the menu change.