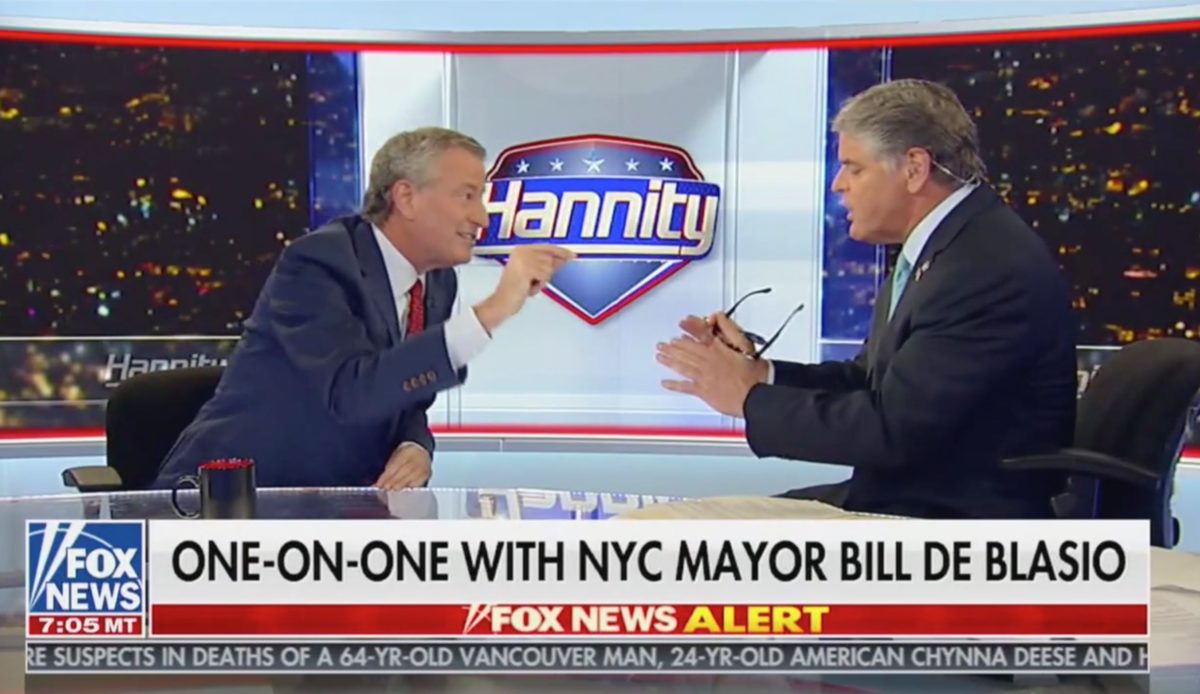 The specific political and policy debate that unfolded between the progressive New York City mayor and presidential “consigliere” Sean Hannity was not only the most fascinating and entertaining cable news programming in weeks, but also perfectly illustrated why all Democratic presidential candidates should visit the sets of Fox News.

The reasons why Democrats should go on Fox News go well beyond the self-promotional benefits that come from appearing on the most-watched network. More importantly, the reasoned discourse between two oppositional ideologies is exactly what is so sorely missing from—and in many ways responsible for—the very divided state of politics in which the country currently finds itself.

De Blasio gets a lot of grief on right-of-center and pro-Trump opinion programming on Fox News and, in particular, on Hannity. The embattled New York mayor is a consistent punching bag for progressive policies so often mocked and vilified, so he deserves a great deal of credit for entering the lion’s den.

But regardless of how one might feel about de Blasio’s presidential platform and record as NY mayor, he is no rhetorical joke. Many forget that he served as the Campaign Director for Hillary Clinton‘s interloping Senate run in New York, which was a minefield of political bombs ready to go off with any misstep. But de Blasio not only successfully managed that but also appeared to take from it the confidence that got him elected.

As he showed on Hannity, despite the constant ridicule he receives, de Blasio not only has a thorough understanding of his political beliefs, but he can also quite ably communicate then in a clear, concise and effective manner.  And though he was playing an away game in unfriendly territory, de Blasio acquitted himself quite well.

This was best evidenced by the Mayor’s attack of Fox News network itself, especially regarding financial inequality. “Too much of the time what Fox and NewsCorp do is try and take people’s minds off the fact they are being screwed economically by the one percent,” de Blasio noted,  which was probably the first time that sentiment had been expressed in such a manner on Fox News. This appearance was an unquestionable win for New York mayor.

On the literal other side of the spectrum, Sean Hannity also deserves accolades for the manner in which he conducted the interview. Yes, he scored his points, notably on gun rights and what he sees as apparent hypocrisy in de Blasio’s armed security detail. But he was never the cartoonish “jerk” as his detractors portray him.

For all the grief Hannity receives from political progressives, there is a reason he has a reputation within the industry as being a very generous person to work for. Ask cable news insiders about the Fox News host, and you’re bound to hear a story about him sharing a friendly beer with a rival or checking-in on — and even offering security for — a cable news foe who received a death threat. That Sean Hannity — the one usually reserved for the time when the cameras are off — was on clear display in his interview with his ideological foe, de Blasio.

That’s not to say that Hannity rolled over. Quite the opposite in fact — it was a spirited and wildly entertaining debate. From my vantage point, and some may disagree, but Hannity never treated de Blasio with anything but the respect that any public official deserves.

The highlights were many, but the overarching theme was that it was an effervescent and (reasonably) well-informed discussion from ideological foes that each can walk away from with some level of joy. Hannity scored his points, de Blasio scored his, but the general tenor was one of grudging respect for simply engaging, rather than of hate-filled animus.

Which leads us back to the original thesis. More Democratic candidates — and “squad” leaders — should take the many invitations from Fox News to go on air. Rep. Alexandria Ocasio-Cortez was recently invited by Hannity for a similar experience —  a full hour dedicated to a meaningful debate on substantive political issues.

Of course, Hannity and AOC are in disagreement about almost everything, but that’s exactly why she should go on the show. Not only would it be entertaining, but I strongly suspect that mutual respect in evidence would actually bridge the damaging political divide that currently infects our national discourse. (One need look no further than the unlikely working relationship AOC has struck up across the aisle with Sen. Ted Cruz.)

DNC Chair Tom Perez notably announced that no Democratic Primary Debates would be allowed on Fox News. At the time I called that a “major mistake.”

And there is a fair point to make that no one from the Democratic party should reward a media outlet that so consistently undermines their agenda, often with misinformed and specious arguments. And there is some risk for candidates who would be reasonably wary of an organization that might be more interested in generating viral bites for the general election than conducting an honest debate.

Though it is a different context, on Wednesday night there is a great benefit for Democratic candidates to present themselves in the uneditable format of live television, whether in the form of a primary debate or one on one interview, if to only demystify their agenda and policies in an unmitigated way. In the marketplace of ideas, Democrats should not be afraid to confront their political foes, and instead, embrace the discourse.

As anyone who viewed de Blasio vs Hannity on Wednesday night could tell you, it was immediately apparent that making critical comments about a third-party not in presence is a very different thing than saying the same to one’s face. And that applies to both host and guest in this instance as each demonstrated polite manners and begrudging respect if only for their respective public statures. And that face-to-face debate between ideological foes in a free-wheeling and underproduced format is so desperately needed to help bridge the current divide.

Democrats: Be brave and go on Fox News to share your ideas. It’s what the nation desperately needs, and as we saw Thursday night, no one is going to hurt you. In fact, you will almost certainly be rewarded with, at the very least, credit for bravery, but also a serious spike in supporters given Fox News’ outsized influence and massive audience.