The Best Thing That Ever Happened to Pete Buttigieg
Opinion 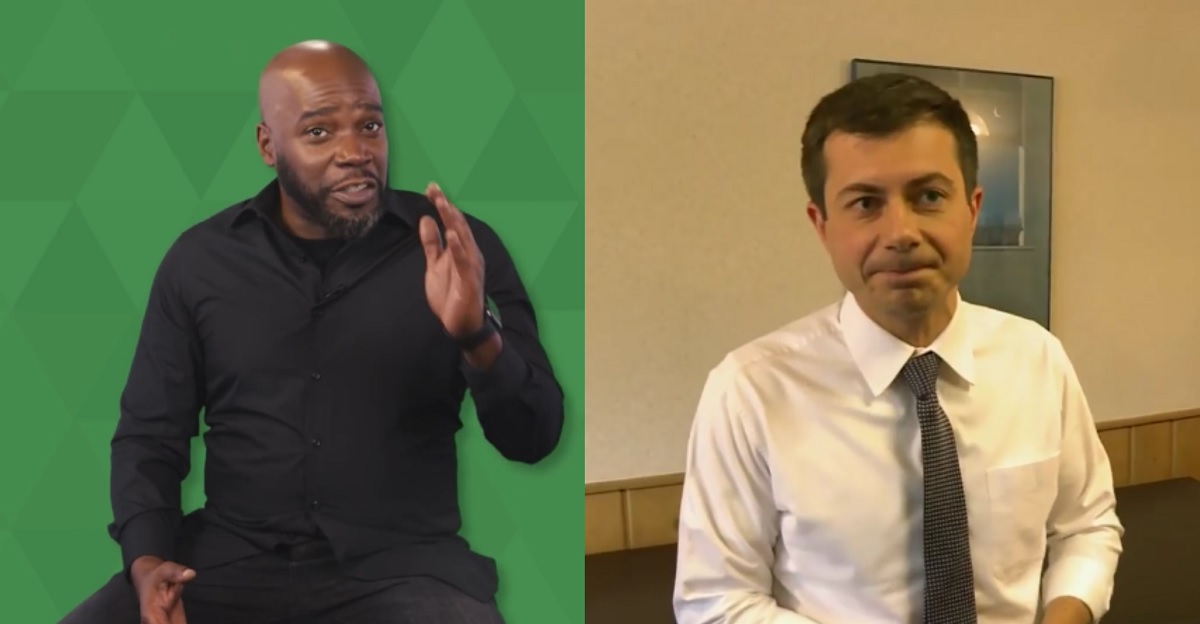 The Root’s Michael Harriot called South Bend Mayor Pete Buttigieg a “lying motherf*cker” in a viral response to resurfaced comments Buttigieg made in 2011, and it could be the best thing that’s ever happened to him.

This past weekend, a clip of Buttigieg speaking about education during the 2011 South Bend, Indiana mayoral race went viral, and not in a good way. Buttigieg, during a discussion of mentoring, said that “there are a lot of kids, especially the lower income, minority neighborhoods, who literally haven’t seen it work, there isn’t someone they know personally, who testified to the value of education.”

Among the strongly negative reactions was Harriot’s equally viral post entitled “Pete Buttigieg Is a Lying MF,” in which Harriot reiterated that Mayor Pete “is a lying motherfucker,” and wove a critique of Buttigieg’s remarks into his own story of educational attainment.

Reaction to Harriot’s commentary was largely positive, although some praised the substance while finding the title overly provocative. But like much of Harriot’s searing, insightful, and hilarious writing, he wasn’t so much being provocative as been provoked. And it worked.

Mayor Pete noticed. And Mayor Pete called Michael Harriot on the phone. Buttigieg described the phone call to NBC News Tuesday, saying “I reached out to the author and, while obviously I think that some of the characterization of me personally is unfair, I do understand the concern. What I said in that comment before I became mayor does not reflect the totality of my understanding then, and certainly now, about the obstacles that students of color face in our system today.”

He also described Harriot’s end of the call, saying “He expressed what he expressed in the article, and went into a lot more depth” about it.

That he did, and wrote about the entire 18 minutes and 5 seconds in a follow-up commentary that was as unsparing as the first. Among other things, Harriot explained to Mayor Pete that “my problem with his comments was not that they were wrong, it’s that he knows they were wrong.”

“We have to disabuse ourselves from the notion that the problem with educational inequality is because of an esoteric lack of support,” I explained. “That’s a lie. And a man as educated as yourself knows it’s a lie. And to regurgitate that narrative publicly is not just dangerous, it is malpractice.”

I conceded that the problems with institutional racism are so complex and go back so far that I’m not sure that anyone—a mayor, a governor or even a president—could fix them. Buttigieg, however, insisted that there are some things that people in power could do to make things more equal, a point I actually agreed with.

“I do think there are some ways to attack these issues with policies that might solve these issues, but would certainly help.” he said.

“But do you disagree with the point I was making?” Mayor Buttigieg asked, listing a few programs designed to alleviate this specific problem. “Sometimes children don’t get to see the possibilities. Do you think the lack of positive examples of educational success can lead to mistrust and a lack of confidence in the system?”

“No…well, yes,” I answered. “But the lack of confidence doesn’t have anything to do with role models or support from parents, it’s because the shit is true!”

There wasn’t really a happy ending for Mayor Pete, no conversion, and not much in the way of encouragement that he’ll be able to attract the support of black voters.

Harriot told Buttigieg that black voters support black candidates because “When you go into a room and sit around a table of white men, we are worried that this is what will happen; that a roomful of white people will talk about role models and confidence and crime and no one in the room will say: ‘Hold up, we can’t talk about any of this without talking about racism. We can’t talk about education without talking about discrimination.’ That is our fear.”

But Harriot pointed out the thing that Mayor Pete did right. “Pete Buttigieg listened, which is all you can ask a white man to do,” he wrote.

At the risk of proving correct the notion that white men are held to lower standards, Buttigieg did something that nowadays can almost be considered a revolutionary act: he listened to a black voter.

Yes, this is a very low bar, but one which the political media and many of the candidates have conspicuously failed to clear. For example, there has been endless theorizing about the reasons for former Vice President Joe Biden’s dominance with black voters, mostly settling on his connection with President Barack Obama and his perceived ability to beat Trump.

There has also been endless repetition of the idea that white candidates who are repelling black voters simply need to win the early white states of Iowa and New Hampshire, and black voters will “come aboard.”

What you don’t see are the equivalent of the endless rural diner segments with Trump voters, or anything but derisive and horserace-obsessed coverage of the candidacies of Senators Kamala Harris and Cory Booker, and Julian Castro.

And when black voters are discussed, it’s done in terms of where they will go. As MSBC’s Zerlina Maxwell pointed out recently, that’s not the right question. Asked who Biden’s black supporters might switch to if the former VP falters in the polls, Maxwell suggested candidates like Harris and Castro who “speak to the issues that candidates of color care the most about.”

“There’s another stat that’s actually more important, and I always say it, which is that a million black people stayed home.” Maxwell added.

But there is a dearth of black voices in the mainstream political media, which means you don’t get endless analysis of the wants and needs of black voters, you get Chris Cillizza talking about them as an obstacle to some other candidate’s success.

I don’t know exactly why Joe Biden is kicking everyone else’s ass with black voters, I just know what I’ve heard. Biden’s association with Obama doesn’t hurt, but I more often hear that it’s his willingness to defend and expand on Obama’s policies, like the Affordable Care Act.

But what I also hear, and what the polling bears out, is that the other frontrunners in the race are, to varying degrees, repelling black voters.

Elizabeth Warren was slowly making inroads, but stumbled badly when she was asked to name a total of five black people — three whom she’d want in her cabinet and at least two whom she’d found politically inspiring — and could only come up with three names.

Then there was her deer-in-the-headlights reaction to black protesters at a speech in Atlanta, followed by video of her lying right to one of the protesters’ faces about sending her kids to private school. That — along with the collapse of her healthcare message — could help explain why Warren’s support among black voters went from a respectable (yet still trailing Biden by 22 points) 20 percent in October to just six percent in the latest Quinnipiac poll.

Buttigieg has been dogged by the policing issues in his hometown, but also took heavy criticism for using a stock photo from Kenya on a page promoting his “Douglass Plan,” and put out a list of black leaders who endorsed the plan, many of who did not actually endorse the plan. There was also a leaked Buttigieg campaign memo that attempted to lay the blame for his low support among black voters on homophobia.

Bernie Sanders has a long history of problems with black voters that includes his naked appeals to white voters and his derision of “identity politics,” although he enjoys support with younger black voters.

There are also a lot of black voters who really like Kamala Harris, and even those who aren’t showing up in national or state polls don’t take kindly to her being maligned or ignored.

So here’s the news for all of these candidates: that precipitous drop in Warren’s support among black voters was accompanied by a ten-point rise in undecideds. That’s good news for a candidate who can figure out a way to pick up that support, but potential bad news — as Maxwell pointed out — for a party that fails to excite them.

Pete Buttigieg may not end up winning the Democratic primary, but he took a necessary — if obvious — first step that the other candidates and the political media should emulate, and which reminds me of a variation on an old joke.

What do you call Pete Buttigieg listening to one black voter?