President Donald Trump‘s movie trailer-style 2020 video, which featured a song from film The Dark Knight Rises, was removed from Twitter after a copyright claim from film studio Warner Bros.

Shortly after, Warner Bros. issued a statement noting the use of Hans Zimmer‘s composition was unauthorized: “The use of Warner Bros.’ score from The Dark Knight Rises in the campaign video was unauthorized. We are working through the appropriate legal channels to have it removed.”

By Wednesday morning, the video was disabled, according to Twitter because of a copyright claim: 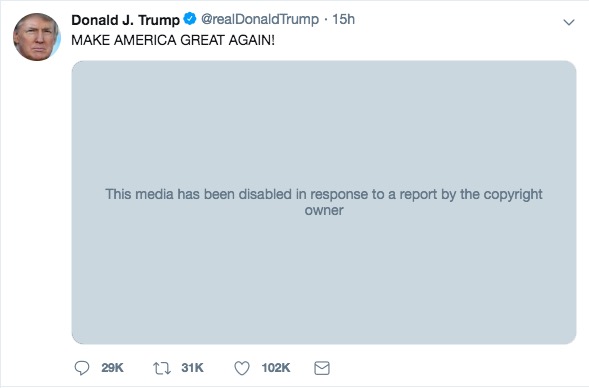 As much as the video seems like a Dan Scavino special, Washington Post writer Philip Bump noted that the clip was originally shared on the pro-Trump r/The_Donald subreddit — a forum the president has taken outrageous content from in the past.