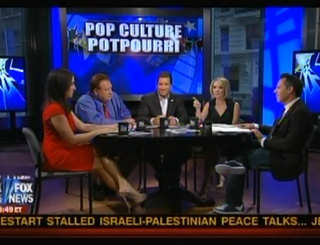 While every week provides something to be outraged at, last Friday’s edition of Real Time went beyond the pale, even for Bill Maher. Maher went on a tirade against the Palins, calling them “inbred weirdos,” while his guests talked about Rep. Michele Bachmann‘s sex life. On today’s The Five, the panel debated whether the phrase was an insulting reference to Trig Palin‘s condition, and whether the media had ignored the show’s reprehensible commentary.

Greg Gutfeld opened the floor on the matter with a scathing monologue attempting to figure out what Maher was up to with his comments. “I’m sure that slur is a lurid explanation for a family with a disabled child,” he noted, though argued that Maher would never admit it– as he has similarly done with other comments. If Maher contends that his opinion’s aren’t sexist, he asked, “are they just hate?” Gutfeld left that question unanswered, but went further to examine Maher’s character. “So what do you make of a guy who says wrong things and then runs scampering from them?” he asked.

His initial answer was “a coward,” but he passed that label on to his audience for listening to his say what he said without protest– in fact, with applause. For them he had his harshest words: “After all, his awful statements fester unchallenged in an echo chamber, and effusive slophouse of flapping, approval-seeking seals. So let’s keep him there, just to remind us that they still exist.”

Gutfeld found no disagreement on the panel– in fact, as the clip of Maher ran, Dana Perino appears to have uttered some profanities at Maher off-microphone. Whatever she said could likely have not been more insulting that what she did say on-air: “I don’t know who stuffed this guy in a locker in high school, but this guy is such a loser,” she ranted, “I can’t imagine any woman…” The panel laughed, but did not disagree. In fact, the only discord on the panel on this point was from Bob Beckel, but not in defense of Maher– he was offended that Andrea Tantaros had equated Maher with the garden-variety liberal. “Don’t equate the rest of us with Bill Maher,” he cried.

It’s safe to say Maher won’t be invited to be one of The Five anytime soon. The segment via Fox News below: